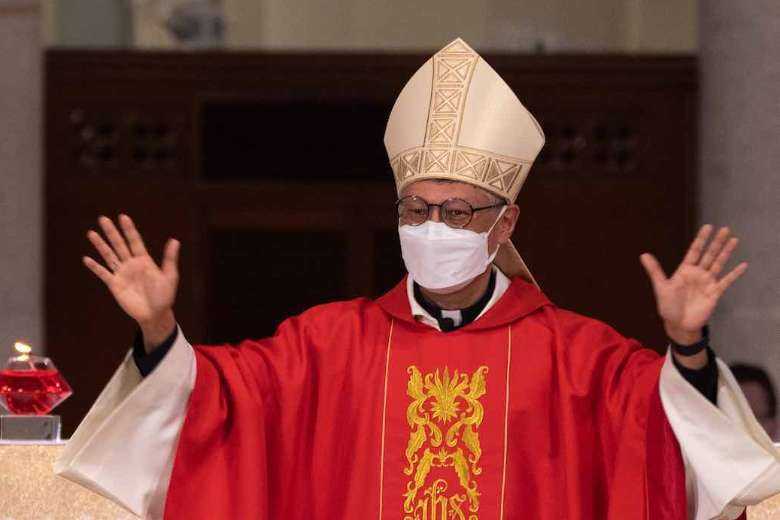 Bishop Stephen Chow of Hong Kong waves to church members after the Episcopal Ordination as bishop on December 4, 2021, in Hong Kong’s Cathedral of the Immaculate Conception. (Photo by Bertha WANG / AFP)

The Vatican has dismissed suggestions in the media that it recently pulled its representatives out of Hong Kong and Taiwan as part of Holy See preparations for establishing diplomatic ties with China.

It was announced by the Vatican on Feb. 5 that he was being reassigned as apostolic nuncio to Congo.

That news came five days after the Vatican announced the transfer of its Taiwan representative Monsignor Araldo Catalan to Rwanda.

Reading more meaning into them is “purely media speculation without any basis,” he added.

The transfer “was expected … because I have completed six years,” Monsignor Javier said adding the same was true of the mission in Taiwan.

“The mission in Hong Kong is not closed. Taiwan is also not folding,”  the Vatican diplomat said. New heads of these missions can be “expected within three months,” he said.

Observers say the Holy See’s diplomatic links with Taiwan continue to be a hindrance to the Vatican establishing formal diplomatic relations with China.

Beijing considers Taiwan as a breakaway province, not as an independent nation.

What is officially known as the Apostolic Nunciature to China is the Holy See’s diplomatic mission to Taiwan, officially called the Republic of China. In other words, the Vatican cannot maintain a mission in Taiwan if it wants to open one on the Chinese mainland.

In the past year, China has also tightened its grip over Hong Kong, crushing a pro-democracy movement there with a sweeping new security law that criminalized all activities that challenge Chinese rule on the island.

China now considers Hong Kong fully as part of its territory. Under the changed circumstances a Holy See Mission in Hong Kong would be superfluous if one comes up in the communist-ruled People’s Republic of China.

'Last of the least objective'

Monsignor Javier categorically “ruled out” that the transfers have anything to do with Vatican activities in China.

Establishing a diplomatic mission in China would be “the last of the least objectives” of the Holy See, said the monsignor.

Speculation about a Vatican mission in China also stems from a two-year experimental agreement China and the Vatican signed in September 2018.

The agreement allowed the Vatican and China to jointly appoint Catholic bishops in the communist country. It was renewed for another two years and expires this October.

Some suspect a Vatican mission in China could be the natural progression of the agreement, whose contents have not been officially published.

The Vatican’s objective in this agreement with China “is not diplomatic … It is pastoral,” Monsignor Javier said.

He said the Vatican wants to “normalize the situation” of the Church in China so that “it can offer pastoral care to” Catholics there.

Since the agreement was signed the Vatican has worked to regularize the appointment of bishops and encouraged those in the underground church to join the camp functioning under state-appointed bishops.

However, the division continues with several underground groups refusing to join the main church, although there are no “dogmatic differences” between them.

Monsignor Javier said what blocks Catholics in the underground church is a psychological barrier resulting from being suddenly asked to change their five-decades-old perception of the state-run Church.

Since 1951 when China-Vatican diplomatic ties were broken, orthodox Chinese Catholics have viewed it sinful to be part of a church, which is controlled by appointees of the communist government.

The change came suddenly. It is hard for Chinese Catholics to accept that the Vatican and the communist government are collaborating in appointing bishops, Monsignor Javier said.

“Then there is also no positive action” from the government to encourage Catholics to leave the underground church, the Vatican official said.Ever since the Sino-Vatican agreement was signed, underground Catholic leaders have complained about the government destroying their churches, arresting and intimidating them, and forcing their priests to join the state-recognized church.

However, the underground church is “becoming thinner and thinner” the Monsignor said.