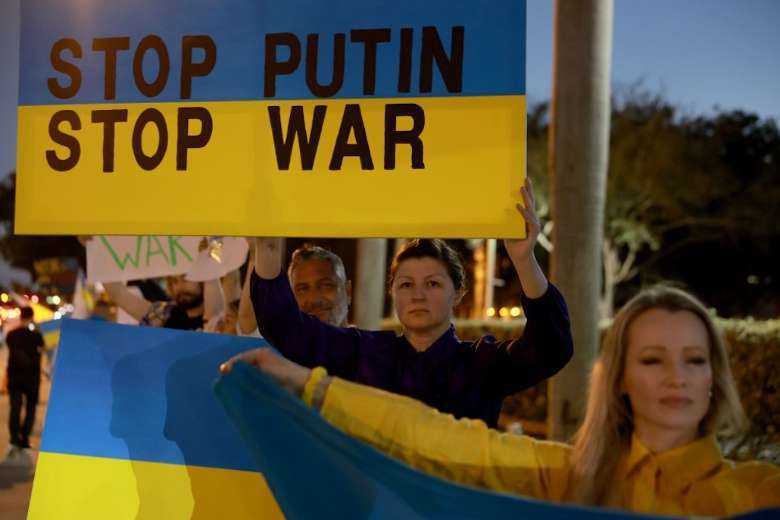 Inna Perez stands with others to show support for Ukraine during its war against Russia in a demonstration in Hallandale, Florida, US, on March 3. (Photo: AFP)

Thai men are seeking to sign up for Ukraine’s International Legion to help defend the beleaguered European country from Russian invaders.

In an emotional plea last week, Ukrainian President Volodymyr Zelensky urged “all citizens of the world, friends of Ukraine, peace and democracy, anyone who wants to join the defense of Ukraine, Europe and the world” to “come and fight side by side with the Ukrainians against the Russian war criminals.”

The applicants need to have proof of former military training and a clean criminal record before they are considered by Ukrainian authorities.

On March 3 alone, several men went to the Ukrainian embassy with pictures of themselves in military uniforms to show that they once served in the Royal Thai Army.

Earlier in the week, a 27-year-old Thai man, who once served as a conscript in the Royal Thai Air Force, told a local newspaper that he was hoping to join the International Legion because he had been moved by media reports of the toll the Russian invasion was taking on people in Ukraine.

Children are dying and they [the Ukrainian people] are asking for help from anyone who can help them, and I want to help

“I can see that Ukrainians are fighting to protect their land and their civilians,” the man, identified only as Chanapong, said after he submitted his application at the embassy on March 1.

“Children are dying and they [the Ukrainian people] are asking for help from anyone who can help them, and I want to help,” he added.

The man said he had strong pro-democratic leanings and had participated in youth-led pro-democracy rallies in Thailand last year when thousands of participants were calling for the military-allied government to resign after nearly eight years in power following a coup in May 2014.

However, he urged other Thais seeking to join the fight in Ukraine to think it through before applying as they may not make it back to Thailand alive.

“[The Ukrainian government] only consider people with military experience, so people who might be considering applying should think very carefully about this,” he said.

Developments in the conflict between Russia and Ukraine have been dominating foreign news in Thailand, where many have been expressing shock at the Russian military offensive and sympathy for its victims.

Thailand’s government has sought to maintain a neutral stance for fear of alienating the Russian government, with which the Southeast Asian nation has close relations.

Thailand has been a popular travel destination for Russian and Ukrainian tourists for years.