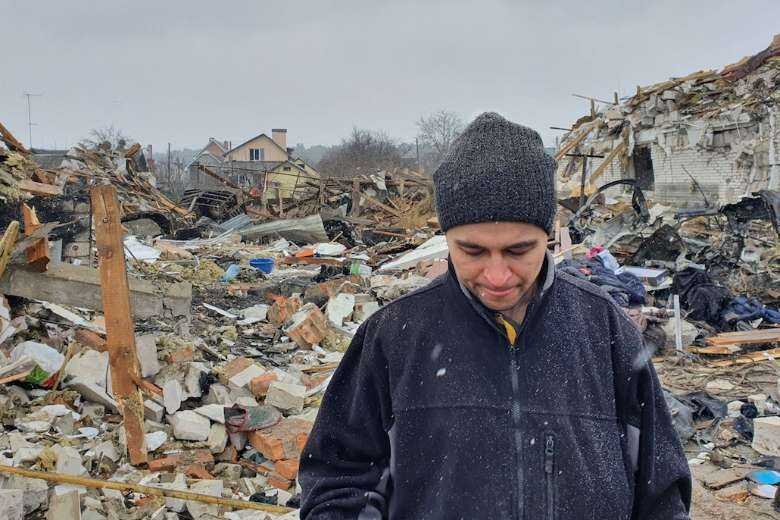 Oleg Rubak, 32, a Ukrainian engineer who lost his wife Katia, 29, in Russian shelling, stands amid the rubble of his house in Zhytomyr on March 2 after it was destroyed by Russian artillery the day before. (Photo: AFP)

The Thai government’s decision to declare the country neutral in the conflict between Russia and Ukraine has drawn ire among citizens and expatriates alike.

After a cabinet meeting on March 1 following a call by some two dozen Thailand-based ambassadors to condemn Russia’s ongoing invasion of Ukraine, Prime Minister Prayut Chan-o-cha, a former army chief, reportedly said at the meeting that Thailand would need to exercise caution so as not to damage its long-standing relations with Russia.

“We need to be composed and make decisions carefully. Thailand must maintain a neutral stance,” Prayut was quoted as saying by a source who was present at the meeting.

Prayut later expanded on this point during a meeting with reporters.

“We need to keep a balance. But most importantly, we have been concerned about the safety of people in countries involved in the conflict. We also have to ensure Thais in those countries are safe,” he said.

“We also support the peace process to end the conflict and war. We need to tread carefully and act through ASEAN’s mechanisms.”

Everyone knows that if the war drags on, energy prices will rise. This will be followed by a rise in inflation. We don’t want these

Following Prayut’s statement, Foreign Minister Don Pramudwinai said the Southeast Asian nation was not in a hurry to condemn Russia because it would not help to improve the situation.

“Everyone knows that if the war drags on, energy prices will rise. This will be followed by a rise in inflation. We don’t want these,” Don said.

Earlier, David Daly, the European Union ambassador to Thailand, noted that the Russian invasion of Ukraine violated international law and urged all member states of the United Nations, including Thailand, to “speak up to save our rules-based international order [because the war] affects us all.”

Thailand has long had close ties with Russia and the Southeast Asian nation received a large number of Russian tourists before the Covid-19 pandemic led to a shutdown of international mass tourism.

The government’s stance, however, has drawn plenty of criticism online.

“There is no neutral stance on this conflict,” one commenter noted. “If you are not opposed to the Russian invasion of Ukraine, prepare to face international sanctions.”

“[Even] Switzerland and Singapore have condemned this unprovoked invasion of a peaceful neighbor,” another commenter noted, referring to two nations that have historically taken a neutral stance in global conflicts.

Some others, however, have sided with the Thai government.

“Look at the warmongers cheering for more war in the Ukraine,” one commenter argued. “If they [the West] had negotiated since the beginning and taken Russia seriously, they [Russia] wouldn’t have even invaded. Like it or not, Ukraine is a buffer country between Russia and NATO.”

Some commenters said they were not surprised by the Thai government’s neutral stance seeing as it came into being in 2014 after Prayut and some other army generals seized power in a coup and proceeded to do away with many democratic rights and freedoms.

“One wouldn’t expect a backward third world dictatorship to take sides, especially one whose civilians are constantly rising up against the criminal junta who grabbed control at gunpoint some eight years ago [and] who despite being universally detested intend to hold on to power for evermore,” one commenter argued.