Many PTA detainees have been held for up to 15 years, some without even having formal charges filed against them 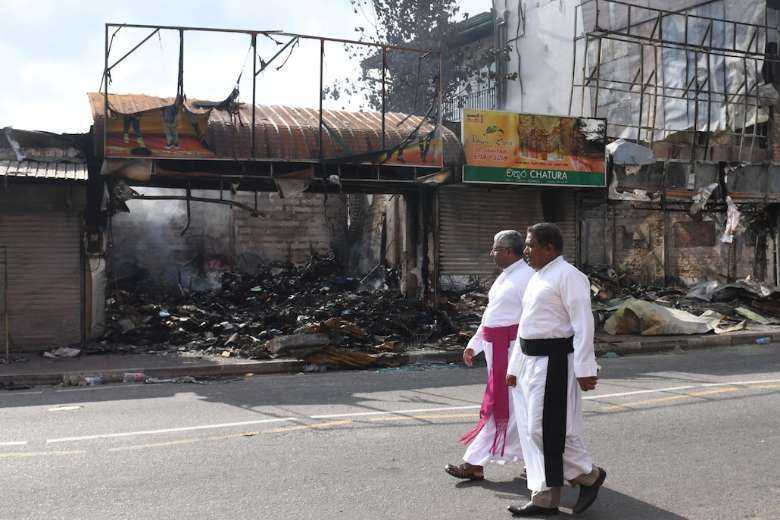 Sri Lankan Catholic priests walk past a damaged shop after a mob attack in Minuwangoda on May 15, 2019. Mosques and Muslim-owned shops and businesses were targeted in a violent backlash after the Easter Sunday terror attacks. (Photo: AFP)

Priests, nuns and human rights defenders have gone to Sri Lanka’s Supreme Court to call for the abolition of the Prevention of Terrorism Act (PTA).

Many PTA detainees have been released after being held for up to 15 years, some without even having formal charges filed against them.

Ruki Fernando, a prominent rights defender and one of the petitioners, said the PTA has terrorized many Sri Lankans for over four decades.

He has also been detained under the PTA, faced restrictions on freedom of expression and travel, and his case dragged on for nearly five years even after his release. His electronic equipment is yet to be returned.

"Instead of repealing the PTA, the government is trying to amend it with cosmetic changes which don’t address many of most serious problems meaningfully,” said Fernando, a consultant to the Justice, Peace and Integrity of Creation Commission of the Conference of Major Religious Superiors.

Problems include forced confessions including torture, prolonged detention without judicial supervision and judicial restrictions on giving bail, he said.

The PTA has ruined our lives and families with not even an acknowledgement, apology or reparations

"The amendments don’t appear to ensure the rights, dignity and well-being of Sri Lankans, but rather they are an attempt to eyewash and appease the European Union, as this draconian law, which blatantly violates international human rights standards, may lead to losing GSP-Plus trade privileges, which will lead to a massive blow to the economy that is already in crisis," said Fernando.

The GSP-Plus scheme offers better access to the EU market for exporters. The EU is Sri Lanka's second-largest trading partner after China.

The PTA, which was introduced as a temporary measure in 1979, allows for arrests without a warrant for unspecified, unlawful activities and permits detention for up to 18 months without a court appearance.

Human rights activists, Catholic priests, journalists, a lawyer and opposition politicians have been among those detained under the law.

During and after Sri Lanka’s civil war, most PTA detainees were Tamil but since the 2019 Easter attacks, most detainees have been Muslims, making this law one that has disproportionately affected minorities.

Tamil activist S. Selvi said Tamils have suffered a lot due to the PTA. "Many Tamils were detained for many years without charges," she said.

The Tamils allege that thousands were massacred during the final stages of the war.

"The PTA has ruined our lives and families with not even an acknowledgement, apology or reparations," said Selvi.

She said that due to international pressure the president pardoned 16 men linked to the LTTE (Tamil Tigers).

The UN Human Rights Commission called for an immediate moratorium on the use of the PTA, calling for a clear timeline be set for its comprehensive repeal.

President Gotabaya Rajapaksa recently directed the police not to use the PTA as a shortcut to dispense with investigations but only if there is clear link to terrorism.

Amnesty International said that since it was first passed as a temporary measure, the draconian law continues to be used by the government to target and harass minorities, activists, journalists and critical voices.

The Human Rights Commission of Sri Lanka has informed the government that the PTA should be repealed and the period of detention of a person under the law is completely unconstitutional.