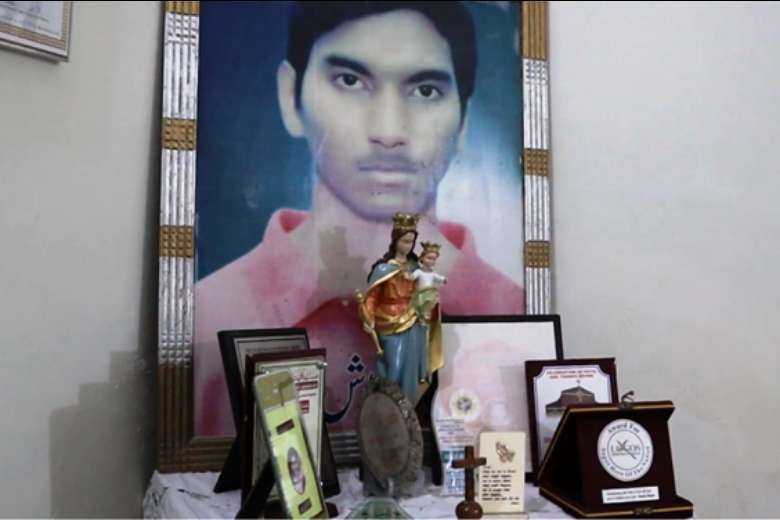 The pedestal dedicated to the memory of Catholic martyr Akash Bashir at his house in the Youhanabad area of Lahore in Pakistan. (Photo: Kamran Chaudhry/UCA News)

Bashir Emmanuel will forever remember the last meeting he had with his son Akash Bashir at the busy bus stop near his home in Youhanabad.

Emmanuel was leaving that Saturday night for Murree, a popular hill station in Pakistan’s Punjab province, to work as a painter-laborer. Akash, then 20, came to the bus stop to return the mobile phone Emmanuel had given him.

“I insisted he kept it so that we could be in touch. It was our last goodbye,” the 69-year-old recalled with a sigh.

The next morning, on Sunday, March 15, 2015, Emmanuel received the shocking news that suicide bombers had attacked two churches in Youhanabad, a Christian neighborhood in Pakistan’s Lahore city, during Sunday Mass.

Within a few minutes, it was confirmed that Akash had been killed in the blast at St. John’s Catholic Church.

Seven years later, Emmanuel's pain has been eased by the Vatican accepting Akash as a Servant of God, making him the first Pakistani Catholic to be put on the road to canonization.

He loved hanging out with his friends and cousins. But that night he was lying alone in a dark room

Akash, who volunteered to be a security guard at his church, died after he blocked a terrorist at the front gate of the church. He stopped the attacker from targeting some 1,000 Catholics gathered inside for Sunday Mass.

“I will die but will not let you go in,” Akash reportedly said while confronting the Taliban-affiliated terrorist, who was carrying explosives. Seconds later, the blast killed the suicide bomber, Akash and a child.

That was the second terror attack at a church in Youhanabad that morning. A blast inside the Protestant Christ Church, within a kilometer of the Catholic church, killed at least 17 people and injured hundreds.

Catholics in Pakistan, particularly in Akash’s Lahore Archdiocese, have hailed him as a hero who sacrificed his own life to save hundreds of lives.

Akash “could have escaped or tried to save himself … but gave his life to save more than 1,000 people present in the church for Sunday Mass,” Archbishop Sebastian Shaw of Lahore said on Jan. 31 while announcing the news of the Vatican accepting him as a candidate for sainthood.

The night before his death, Akash was unusually upset, remembers his father. His otherwise talkative son was quiet that night. “He loved hanging out with his friends and cousins. But that night he was lying alone in a dark room,” Emmanuel said.

Emmanuel tried to cheer up his son and then gave his mobile phone to him “so that we could be in touch” while Akash was volunteering as a security guard at their parish church. Akash Bashir's younger brother Ramish (left) with his father Bashir Emmanuel and mother Naz Bano inside their home near a picture of Akash. (Photo: Kamran Chaudhry)

A tragic memento of martyrdom

Akash’s mother Naz Bano remembers hearing the explosions inside their three-room house, which is on a narrow street behind Christ Church.

“At once I thought of my son. Soon the streets were filled with people,” the 56-year-old said.

She rushed with her younger son Ramish toward St. John's Church. It took a while for her to gauge the intensity of the human tragedy before her worst fears were confirmed. Akash was lying dead in the dust, his right arm almost ripped off.

“I could not believe my eyes,” said Naz Bano.

The QMobile phone, a local brand, was recovered from his body, split into two. Akash’s family carefully preserve the broken phone as a tragic memento of his martyrdom.

Akash was posthumously conferred more than 30 awards including a prestigious bravery award from Punjab’s Ministry of Human Rights and Minority Affairs.

His larger-than-life image has been emblazoned on the wall facing the church where he volunteered as a security guard.

Akash was born on June 22, 1994, at Risalpur in Nowshera district in the northwestern province of Khyber-Pakhtunkhwa, near the Afghanistan–Pakistan border. His father worked as a bus driver for a Catholic school.

The poor family struggled for survival due to their meager income. Emmanuel moved to Lahore city with his wife, daughter and four sons in 2002. They have lived in the house behind Christ Church ever since.

Akash changed schools frequently until he graduated to eighth grade from Don Bosco Technical Institute for Boys. A Salvatorian nun later helped him in getting admission to a government institute from where he earned a diploma in stitching and grafting. He started working at a local garment factory making 20,000 rupees (US$115) a month.

“He wanted to join the army but we could not afford to pay for further studies,” said Naz Bano.

In 2014, Akash attended a seminar on lay leadership organized by the Theological Institute of the Laity in Sadhoke, north of Lahore. After returning, he began to attend church services regularly. He also applied to become a security volunteer at the church.

Akash decided to join the church security service in 2014, hardly a year after the devastating twin suicide bombing at the All Saints Church in Peshawar, the capital of Khyber Pakhtunkhwa province in 2013. It killed at least 85 people and injured some 150.

The Peshawar attack came shortly after the March mob violence in Lahore the same year. Some 100 houses were set on fire at Joseph Colony, another Christian neighborhood of Lahore, following blasphemy allegations against a Christian man.

The family was “dead against” Akash joining the church’s security team given that terrorists were targeting churches and Christians, Naz Bano said. But Akash used to shrug off such concerns with a smile, his mother recalled.

It is a blessing for the local Church. Finally, the sacrifice of a layperson is being recognized. It will strengthen our faith. Ours is a church of martyrs

She said she often sees him in dreams. “I see him with Father Abraham. His memories remain alive. After all, he was my very dear son. He was faithful to God. We are happy he got his heavenly reward. Our happiness is greater than our grief,” she said.

He became passionate about bodybuilding around the same time he began guarding the church, said his brother Arsalan, recalling how he had crafted a set of dumbbells by filling cement into tin cans.

Akash was committed to the responsibility entrusted to him. He even attempted to convince Arsalan to become a volunteer as there was a shortage of security guards. “But I was not interested,” the brother recalled.

Bashir’s friend Rizwan Rashid, who used to volunteer with Akash, remembers cleaning the church together before Mass.

“Sundays were usually reserved for playing football. I really miss him now when I watch boys playing on the ground,” said Rizwan, who is now a permanent security guard at the church.

Father Francis Gulzar, the vicar general of Lahore Archdiocese, said he owes his life to Akash.

“I was celebrating the second Mass when the blast ripped our front gates. Akash had blocked the suicide bomber at the gates,” he said.

“It is a blessing for the local Church. Finally, the sacrifice of a layperson is being recognized. It will strengthen our faith. Ours is a church of martyrs.”

The priest said he had observed more people were coming to church since Akash’s martyrdom.

“Our youth has become more zealous and passionate. One of Akash’s brothers is a regular security volunteer. The whole family has come closer to the Church. They live this pride in God.”

I am doing this for Akash. Our hearts fill with pride when visitors point to our drawing room where we keep the shields won by Akash. We treat it as a sacred space

Arsalan is among 52 guards — both male and female — protecting St. John's Church now.

“I am doing this for Akash. Our hearts fill with pride when visitors point to our drawing room where we keep the shields won by Akash. We treat it as a sacred space,” he told UCA News.

“Since the Vatican’s announcement, media persons are frantically calling us for interviews, while relatives pour in for the nights of singing and dancing,” said Naz Bano while informing that the family was busy preparing for the wedding of Waqas.

The 54-year-old mother said she would miss Akash’s physical presence at the wedding. “But we all feel Akash is with us,” she said with teary eyes. “He is already a saint for local people’

A diocesan inquiry into the life and activities of Akash, which will start soon, will have to establish that he lived a virtuous life and practiced his faith heroically. Upon the Vatican accepting his heroic and virtuous life, he will be declared a Venerable, the first stage before beatification and canonization.

Father Gabriel Cruz, a Salesian from Mexico and vice-postulator of the cause of Akash, said many people have been reporting favors they received through the intercession of Akash “such as healing or finding a job.”

The priest, who works with young people, said most Catholic youths in Youhanabad had told him that their experience of terror and sadness “has transformed into hope and happiness” since Akash’s heroic act.

Christians make up around 2 percent of Muslim-majority Pakistan’s 220 million population. For decades, they have been targets of attacks and riots, often over allegations of blasphemy.

Minorities continue to suffer as “authorities fail to provide adequate protection or hold perpetrators to account,” Human Rights Watch said in its latest report in January.

The newly paved road that runs through Youhanabad might bring in more terrorists. But the young Catholics there now have a role model to confront terror.