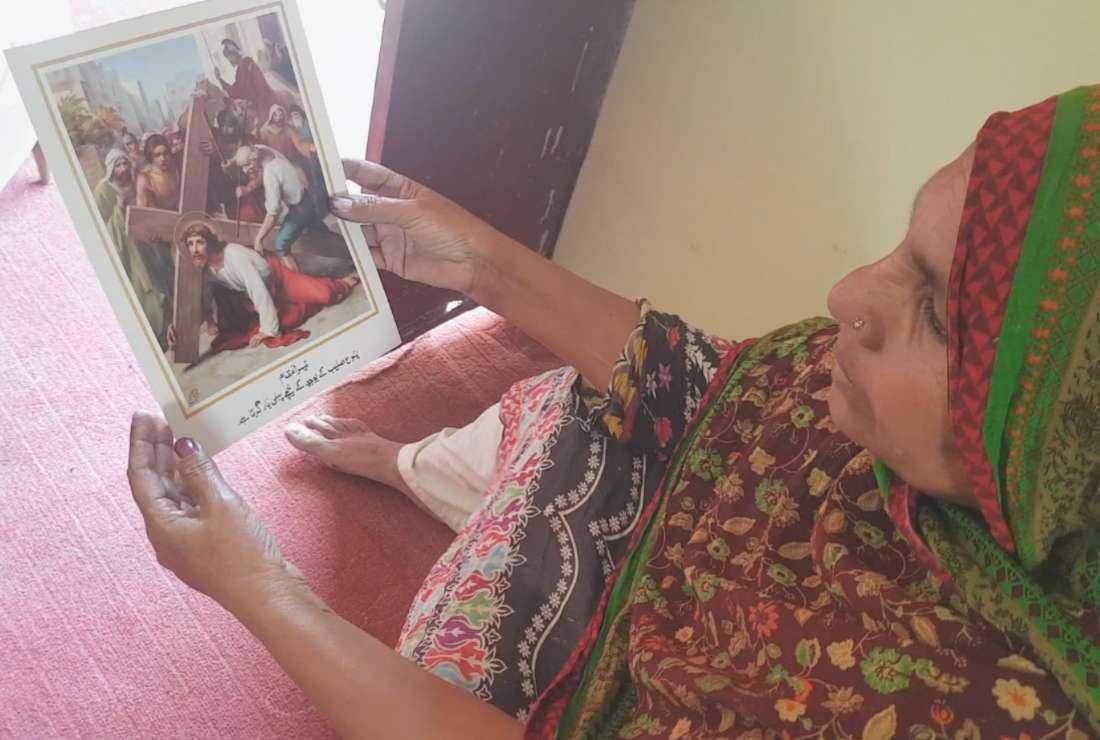 Nadeem Masih was taking a nap on a hot summer afternoon in 2020 when his mother woke him up to remind that he was supposed to repair the damaged roof of the local Catholic church.

A month had passed since the old wooden beams had caved in under the weight of tiles and Parveen Bibi hadn’t been able to sleep thinking about it.

“I couldn’t refuse her,” said Nadeem, a school dropout who worked as a laborer, loading vegetables and hay bundles at the truck stop on the outskirts of their village, Qila Natha Singh, around 80 kilometers from Lahore.

The 20-year-old decided to forsake his meager daily earnings of 500 rupees (US$ 2.69) and joined by his mother began the repair works at the church. “We started by removing the old cracked beams. The villagers joined us later,” Nadeem told UCA News. “We would get up at five in the morning and start laboring after a quick breakfast of leftovers from the previous night’s meal or make do with eggs from our hen pen.”

Putting food on the table was a difficult task as Nadeem had forsaken his daily wages during the couple of weeks it took to restore the church roof.

But for 51-year-old Parveen Bibi it was a small sacrifice she and her son were making for the sake of their faith and the local Church community comprising of some 25 Catholic families, most of them farmers and laborers, living in a Muslim majority village.

For them the church located on a street behind their house was not a mere place of worship, but the Biblical rock upon which the Christian faith had been built over a century or so in the Punjab province. Qila Natha Singh, named after a prominent Sikh resident in the pre-independence era, is located close to the border with India in the province of Punjab, which houses four-fifths of the country’s Christian population.

Most Punjabi Christians are unskilled, landless rural folks with little or no education. “There is a lot of poverty here,” Parveen Bibi said.

Around 1909, Catholic missionaries joined their Protestant counterparts in encouraging Punjabi Christians to settle as tenants and peasants in these vast tracts of land.

The Catholic Church and Methodist Church set up around 20 villages in the late 19th and early 20th centuries to bring together scattered local converts in order to improve their socio-economic conditions, according to historical accounts. Most of these model villages are located in Kasur, Khanewal, Faisalabad, Gujranwala and Sheikhupura districts and were able to provide decent living conditions to a few thousand Christian converts.

Yet most of the native Christians remained dependent on the Sikh and Muslim landlords, working for them as hired hands.

Like her fellow religionists, Parveen Bibi’s family too worked in the fields. “Even if you did not want to work, they would take you, anyway,” she recalled.

Pakistani historian Ayesha Jalal records the turn of events from 1850 through to decolonization and the partition years, in her book, Self and Sovereignty, albeit from a Muslim-centric perspective. “In their dress, poor economic status and religious beliefs, Christians in the Punjab were closer to the Muslims,” she wrote.

They had nothing in common except their faith with the educated Christian professionals, mostly Anglo-Indians, Goans and native elite converts, who lived in big cities such as Karachi and Lahore.

Punjabi Christians were always treated with contempt due to their caste background and their dark skin. They are called ‘chuhras,’ a Punjabi derogatory word that connotes dark skin, low social status and untouchability. Parveen Bibi takes off dried dung cakes from the front wall of her house at Qila Natha Singh village in Punjab province.

Faced with social, cultural, economic and political isolation, as also the rising security threats, these poor Christians had little to fall back upon other than their religion and physical labor.

A majority of them still work as brick layers. “Relative to their percentage of the total population, a high proportion of bonded brick-kiln workers in Punjab are Christians,” noted a recent report by the New York-based Human Rights Watch.

The first and only Catholic Church in Qila Natha Singh was built in the 1990s by a Belgian Capuchin missionary, Father Jerome who also founded the Kasur parish, one of the oldest in the Archbdiocese of Lahore.

The Christian community living in Kasur and its surrounding areas is simple, devoted Catholics very strong in their faith.

In Qila Natha Singh, they look forward to the visit by the catechist from Lahore Archdiocese who comes here to celebrate the weekly Sunday Mass.

Parveen Bibi understands the importance of the catechist’s weekly visits more than the others of her own family or faith, as also the need to maintain the Catholic Church.  In 2019, she even spearheaded a campaign to raise the church walls to ensure privacy during worship. Parveen Bibi is cleaning the Catholic calendar with her dupatta (long scarf) at her house in Qila Natha Singh village in Punjab province.

Her engagement with Church activities often compel her to skip essential household chores like  making cow dung cakes with her wrinkled hands and pasting them on the exterior brick wall to dry, to be used as fuel for cooking.

There is little doubt that as a Catholic, Parveen Bibi stands firm in faith and is ready to make a few sacrifices. “I will remain faithful to the house of God till death. My faith is a gift from my ancestors,” she told UCA News.

A regular Churchgoer who never failed to cover her head with a dupatta (long scarf), Parveen Bibi would be accompanied by her four children. But then, the daughters got married and left the household.

Two of her daughters were married to Protestant men as she couldn’t find suitable grooms in Qila Natha Singh. Most of the male Catholic youth in the village were engaged in menial jobs.

They were arranged marriages and Parveen Bibi is happy her daughters married men chosen by the family. “My daughters are married into protestant families. But I want my grand children to learn the Catholic traditions, get higher education, become officers and serve the church,” she said .

Whenever her daughters visit her, Parveen Bibi ensures the six grandchildren accompany her for the hour long prayers at the church.

Bibi had arrived as a newlywed in Qila Natha Singh a few years before the construction of the 1089 square foot church.

She recalls how the village was segregated between Christians and Muslims with separate community ponds to fill water for their daily needs.

“My in-laws told me to avoid the Muslim pond,” she recalled. The separate water ponds were abandoned once piped water supply was introduced in the village.

Parveen Bibi still prepares the breakfast for her family using twigs and dried dung cakes as fuel to feed the clay stove. She also feeds the cattle tied under a straw shed outside her house. Inside, potatoes lie piled up at the corner of her store. Sharifa Bibi is seen cleaning the mud hayrack of her cattle in Qila Natha Singh village in Punjab province.

“Nobody sleeps on an empty stomach in our area. Potatoes, the main crop of Punjab, are readily available. You only have to request the farm owner,” she said.

Meat is bought and served on the rare occasion when the daughters visit or her husband brings home his monthly earnings.

“Village life is hard but we love the clean air, fresh vegetables and pure milk,” she said.

The family still recalls the special meals when the children received the sacrament of confirmation, an annual celebration in the village. “Our family travelled to Kasur city to attend the bishop’s prayer. The children wore newly stitched shalwar kameez (traditional tunics with pleated trousers) for the confirmation. We were so happy,” Parveen Bibi recalled.

Despite her faith, the mother in her has a few regrets in life.

“We couldn’t afford good education for our four children. Both my daughters could study only up to the fourth grade,” said Parveen Bibi. The social status of Christians hasn’t improved over a century or so. The local Muslims barbers won’t cut the hair or shave the beards of Christian men. Many still avoid eating or drinking with Christians.

The objective to raise their economic profile remains a distant dream as very few Christians own any land.

Parveen Bibi wants that to change in her lifetime, to be able to see her grandchildren as officers. Those who migrated from the villages to Lahore are serving as nurses and teachers and are doing clerical jobs in government offices.

Every year the Church of Pakistan celebrates mother’s day to honor its mothers and grandmothers like Parveen Bibi, who are called in front of the altar to be blessed and offered garlands.

As Father Bonnie Mendes, regional coordinator for Caritas Asia, put it, “Mothers have always been important in South Asian homes. In some places she would even be known as the Queen of the home. Even in a patriarchal society of Pakistan it is well acknowledge that mothers give their children a good upbringing.” Father Inayat Bernard, the chaplain of Caritas Pakistan, observed that mothers in the villages are the most influential when it comes to promoting church work or assisting the catechists and the priest.

“The husbands are out at work and they have little time to spend with the kids. The women take care of everything – from the household needs to spiritual needs.”

Father Bernard, who worked in Kasur district until 2005, recalled the times when there were no cell phones. “The mothers in the villages would tell stories at night to their kids. Though illiterate, they did share their faith, which is very strong, with the kids. They made sure the kids were dressed properly and reach the church on time,” he said.

The greatest hope for the Catholic faith in Pakistan is mothers like Parveen Bibi, they agreed.