Masses called off in Malaysia as Covid-19 spreads 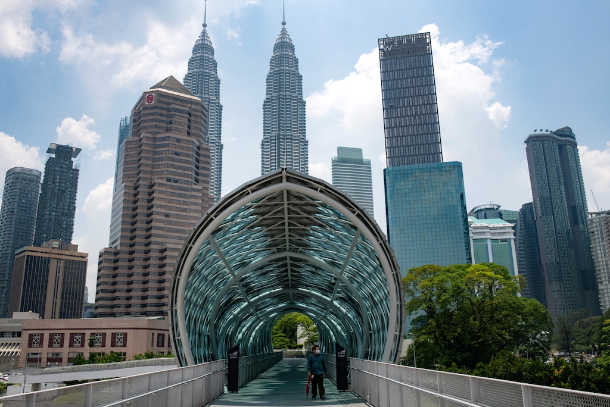 A man wears a mask at Saloma Link Bridge in Kuala Lumpur on March 12 amid fears over the spread of Covid-19. (Photo: AFP)

Catholics in Peninsular Malaysia will not have liturgical gatherings for an indefinite period as part of measures to check the spread of coronavirus.

Bishops of its three dioceses issued a joint letter suspending all public liturgical programs for two weeks from March 14, with a plan to extend the suspension if the situation demands.

"We will continue to monitor and review the situation" to determine "if the suspension needs to be extended," said the bishops of Penang, Melaka-Johor and the Archdiocese of Kuala Lumpur.

Singapore Archdiocese, which covers the entire city-state on the tip of Peninsular Malaysia, said on March 12 that it will continue to suspend liturgy.

Archbishop William Goh of Singapore last week announced a plan to end on March 14 the month-long suspension he had imposed on liturgy. But his latest circular canceled that plan and continued with the suspension as the situation has worsened.

The three Malaysian bishops said the situation has worsened recently to reach 149 confirmed cases in the country as of March 12 — an increase of 126 cases within less than two weeks.

Malaysia has seven dioceses but four are on Borneo island where Covid-19 infection has not been severe.

The bishops said the measures follow the recommendation of the Ministry of Health, which on March 11 asked for all large gatherings to be postponed.

All meetings, gatherings, formations, fellowships and events in churches are canceled will be put on hold during this period, the Malaysian prelates said.

Weddings and funerals are to be conducted privately with guests limited to immediate family members and close friends, the pastoral letter noted.

The bishops said their measures "may appear to be extreme but we recognize that our failure to do so may have dire consequences resulting in an explosive outbreak."

The statement was jointly signed by Archbishop Julian Leow of Kuala Lumpur, Bishop Sebastian Francis of Penang and Bishop Bernard Paul of Melaka-Johor.

Archbishop Goh said he had announced lifting the suspension last week "in the context of a stabilized situation." However, the situation has become so serious that the World Health Organization (WHO) declared the virus a pandemic on March 11, he said.

He said the administration had introduced stringent measures to include social distancing and limiting crowds. The archdiocese will not be helping the situation if Masses are resumed, he said.

The decisions of the dioceses came after governments in the region asked people not to hold large gatherings.

The WHO has declared Covid-19 a pandemic, meaning the virus is spreading worldwide and affecting many people. As of March 13, 4,720 had died from 128,343 confirmed cases worldwide.

"All mass gatherings should be postponed to minimize the spread of Covid-19," Malaysia’s Health Ministry said on Twitter.

Singaporeans have been urged to be mindful of the outbreak when attending religious services as reports emerged that 95 Singaporeans had attended a large religious gathering in Malaysia at which several people tested positive.

The event is reported to have taken place at a mosque in Kuala Lumpur between Feb. 27 and March 1, involving around 10,000 people from different countries.

Singapore's Environment Minister Masagos Zulkifli said in a Facebook post on March 12 that the Health Ministry is identifying and investigating the Singaporean attendees.