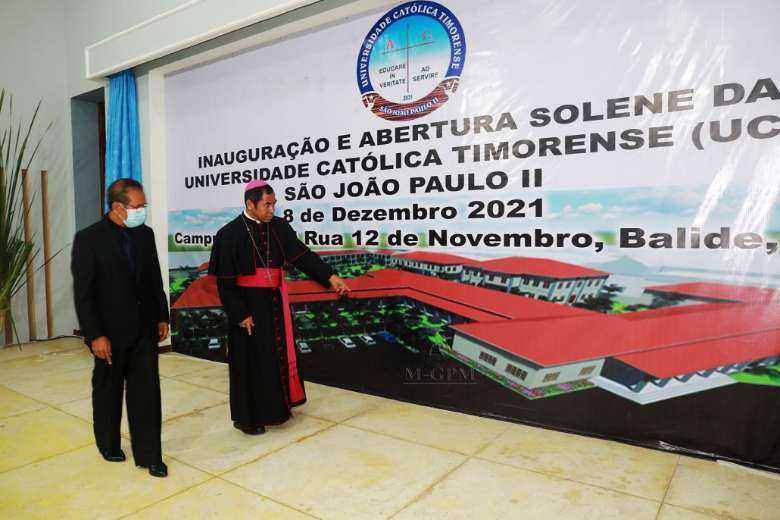 The University of Saint Joseph (USJ) in Macau has signed a deal with the newly established Catholic University of St. John Paul II (UCT) in Timor-Leste for academic cooperation and exchanges.

Since its foundation is 1996, USJ has operated under the Catholic Diocese of Macau and is affiliated with the Catholic University of Portugal. It marked its silver jubilee last year and received permission from communist authorities in China to admit students from mainland China.

UCT started operating with some 50 professors and aims to reinforce its faculties with visiting professors from Portugal, Macau, Indonesia and Brazil.

USJ rector Stephen Morgan said the cooperation will allow both institutions to exchange students and teachers, opening the way for UCT to establish ties with the Catholic University of Portugal, Jornal-O-Clarim, the Portuguese-language weekly of Macau Diocese, reported on Feb. 25.

“I was ecstatic to see the launch of the Timorese Catholic university. The University of Saint Joseph has always had many students from Timor-Leste. It has always been a joy to be able to teach them and they are an asset to their country,” said Morgan.

Macau, a gambling and gaming hub, is special administrative region of China with an estimated population of about 700,000

"We will obviously seek to collaborate with the Timorese university and support this new venture — for example, through participation in the International Federation of Catholic Universities.”

Morgan said he had attended a meeting of the higher council of the Catholic University of Portugal and discussed how the two Catholic institutes in Macau and Timor-Leste can collaborate more and benefit from new partnerships, particularly in faculties such as theology, management, information technology and environmental sciences.

He added that ongoing cooperation will help the Catholic institutes maintain their excellence and international reputation.

Macau, a gambling and gaming hub, is special administrative region of China with an estimated population of about 700,000.

It was a Portuguese colony from 1557 to 1999. Thanks to Portuguese rule, Catholicism has flourished in Macau. About 30,000 Catholics live in nine parishes of Macau.

Timor-Leste is a tiny Southeast Asian Catholic-majority nation of 1.3 million. A Portuguese colony from the 16th century to 1975, it gained independence in 1999 from decades of Indonesian occupation following a bloody war of independence.

About 97 percent of Timorese are Catholics and the Church is highly regarded for its role in gaining independence from Indonesia.