Parents allege the minor victim was being forced to convert to Christianity, a charge denied by church leaders 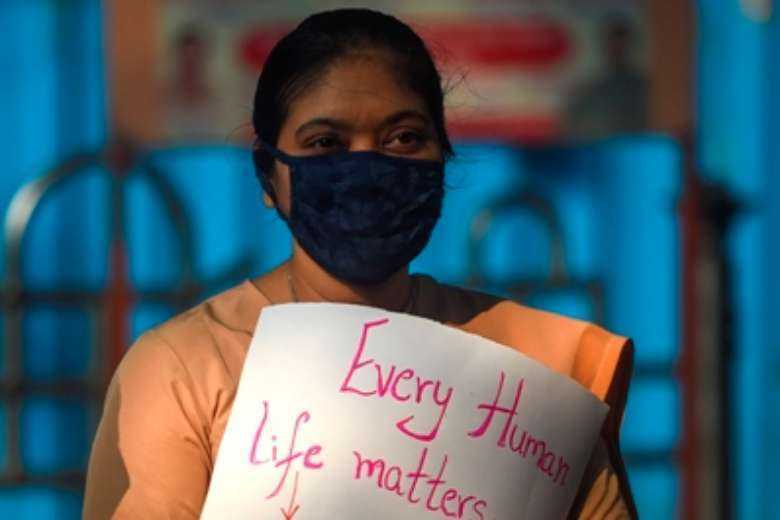 A nun holds a placard during a protest to condemn the alleged gang rape and murder of a young girl in the northern Indian state of Uttar Pradesh on Oct. 6, 2020. (Photo: AFP)

An Indian court has released a Catholic nun on bail more than 40 days after she was arrested in connection with the suicide of a 16-year-old girl allegedly after refusing to convert from her Hindu religion to Christianity.

The district court in Thanjavur in the southern state of Tamil Nadu also granted protection from arrest to another nun accused in the case reported in January.

The parents of the minor girl, who was studying at Sacred Heart Higher Secondary School in Michaelpatti under Kumbakonam Diocese, had alleged that she was forced to take the extreme step after nuns harassed her for not converting to Christianity.

Church officials denied the charge but hostel warden Sister Sahaya Mary, a 62-year-old member of the Franciscan Sisters of the Immaculate Heart of Mary, was arrested and remanded in judicial custody on Jan. 18.

Tamil Nadu police disputed the religious conversion angle in the case, saying the girl had not made any such revelation either to the police or the magistrate who took her dying statement.

However, the investigations were handed over to the Central Bureau of Investigation (CBI), a federal agency, following an order from the Madurai bench of Madras High Court.

In his petition before the top court in the state, the girl’s father S. Muruganantham had said he had no faith in the investigations carried out by state police.

Sister Amala Irudhaya Mary, a lawyer by profession, told UCA News on March 2 that the sisters now have been granted “protection from arrest” by the court.

“We have nothing to hide and will fully cooperate with the federal probe agency,” she said while adding that “the probe will vindicate the innocence of our nuns.”

The lawyer nun said the allegation of religious conversion was “totally false and fabricated” but refused to share more details of the case because it was under investigation.

Tamil Nadu police had claimed in court that their investigations had revealed that the victim was not under any pressure. In fact, she preferred to stay at the hostel even during holidays to avoid being harassed at home by her stepmother.

The court, however, wanted the allegations based on the contents of an old, privately recorded video of the victim to be further probed.

The video footage showed the girl alleging that a nun, whom she does not name, had asked her parents’ permission to convert her to Christianity.

A male voice in the background of the 47-second video asks her if her parents’ refusal was the reason behind her harassment by the warden and she replies: “It may be.”

Church leaders said the school was involved in educating local girls for over a century but no such allegations were ever made against it.

They are hoping the federal probe agency will clear the air of suspicion caused by the allegation.

Pro-Hindu groups, however, want stringent action taken against the nuns and claim the charges of religious conversion were backed by evidence.

2 Comments on this Story