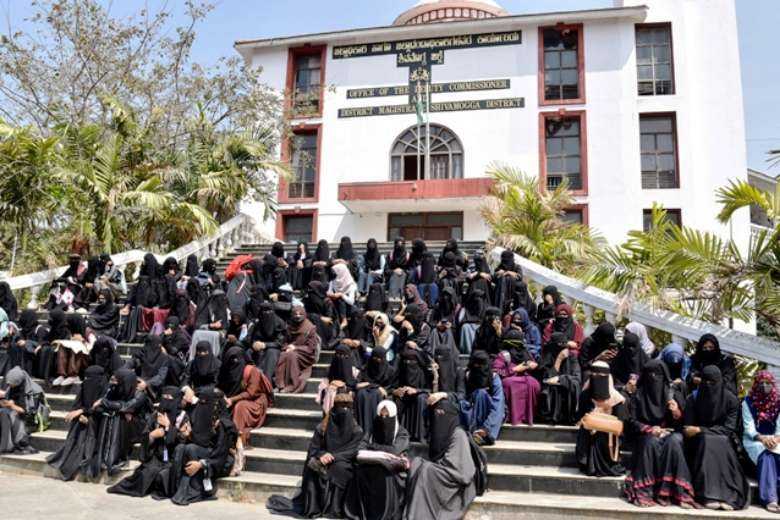 Students and supporters sit in front of the office of the deputy commissioner in a protest against the order banning the hijab in schools and colleges in Shivamogga district in India’s Karnataka state on Feb. 17. (Photo: AFP)

The Karnataka government’s controversial order banning school and college-going Muslim girls from wearing the traditional hijab covering their hair has provoked protests from the community in many Indian states.

Protests have also been made in Islamic countries such as Kuwait, where influential leaders are calling for a ban on the entry of any member of India’s ruling Bharatiya Janata Party (BJP) into their country.

The ban order was issued after an altercation in the Udipi district between hijab-wearing students and members of a right-wing Hindu group, which objected and in turn came to the campus sporting saffron color scarves.

The confrontation on campuses between Hindu and Muslim students also reflects the political binary between the Kerala-based Popular Front of India through its student wing called the Campus Front of India and Rashtriya Swayamsewak Sangh, the ideological front of the BJP that rules Karnataka.

The constitutionality of the official order has been challenged in Karnataka High Court. At first, a single judge seemed to have reinforced the ban while referring the matter to a full bench, saying no religious dresses should be worn in the interim period. A three-member bench headed by Chief Justice Ritu Raj Awasthi and comprising Justice Krishna S. Dixit and Justice Khazi Jaibunnesa Mohiyuddin is now hearing arguments in the case.

The Karnataka government has argued in court that the hijab is not an essential religious practice of Islam and preventing its use does not violate Article 25 of the Indian constitution that guarantees religious freedom.

A prominent section, including many in left-wing political parties, support the right of women students to wear the hijab as a part of their religious identity

Lawyers for the women students say the government order was unconstitutional, vindictive, targeted the minority community and would have the effect of injuring the education of Muslim women.

Nationwide, the numbers of Hindu and Muslim women in senior schools and college are substantially behind those from the Christian and Sikh communities, surveys have shown.

The High Court bench has invited great interest for several reasons. Its proceedings are being livestreamed on YouTube and are attracting audiences in the tens of thousands across the country.

It is also putting the spotlight on the female Muslim judge along with Justice Dixit, who has in the past been called out for remarks criticized as being misogynist.

The court debate has been echoed on social media as well as in television debates and newspaper articles which show, in a frightening manner, the widening religion-based divide in India.

But while the Hindu right wing is unanimous in demanding a nationwide ban on the hijab and any other sign of religious attire worn by any student in class, the liberals in civil society are sharply divided.

A prominent section, including many in left-wing political parties, support the right of women students to wear the hijab as a part of their religious identity or, if they so wish, to reject it as a sign of patriarchy.

A small liberal section of Muslims, including professors and some in the media, however, caution that the hijab will go to strengthen orthodoxy, patriarchy and even religious extremism in a community that is only just exploring its place in modern society.

Amid all this, the Christian community and the Catholic hierarchy have stood out for their silence.

On the other hand, Loyola College, a Jesuit-run institution in Vijayawada, Andhra Pradesh, was condemned on Feb. 18 when it barred some hijab-wearing students from class. The girls protested, their parents mobilized religious leaders and, finally, the district administration head ordered the principal to let the girls attend class. The students, for the record, had identity cards with photographs showing them wearing the hijab.

Muslim leaders reached out to Catholic lay leaders in the state to express their anguish at the insensitivity of the school’s Catholic management. Muslims, they said, had stood with Christians whenever there was any case of persecution or targeting of the community.

While Muslims and Christians have not banded together anywhere in India to challenge right-wing Hindu extremism, both have often marched in non-violent civil action organized by civil society.

When it is a Christian cause, top church leaders have come out openly to challenge the government and the political leadership

It is only in Kerala that they find themselves ranged in acrimonious confrontation as they maneuver for favorable political space and economic opportunity.

The Church has received great civil society solidarity in its own challenge to the Karnataka government enacting a law against religious conversions.

More than 40 civil society groups from Karnataka, among them many of the Muslim community, had rallied behind Bengaluru Archbishop Peter Machado, who led the fightback against a series of acts by the state government targeting the Christian community. These included a survey of churches, hounding of pastors and, finally, the State Legislative Assembly rushing to pass the anti-conversion bill.

The bill, in effect, criminalizes conversions to Christianity and Islam, insinuating that they are all the result of coercion or allurement. It all but outlaws interfaith marriages too, saying they are used to convert women. The bill is likely to be taken up in the upper house, the Legislative Council, before it becomes law. This bill is the harshest of similar laws in nine other states.

On the face of it, the Christian silence on the hijab issue is inexplicable. When it is a Christian cause, top church leaders have come out openly to challenge the government and the political leadership.

Supporting the cause of Muslim women will not be making them more conspicuous in the eyes of the government. Government agents would no doubt be persuading them not to be seen backing any movement linked even distantly with the Popular Front.

No one has yet accused the Church of Islamophobia. But many do want to know why a fellow minority community is keeping its distance.

Unlike France, whose position against religious identities in the public space is harsh but non-partisan, India has a complex set of rules on articles of personal clothing or adornments revealing religious identity.

Sikhs are allowed to wear all five symbols of their faith: a turban over long hair kept in place with a comb, a metal ring on the wrist, a short dagger called the kirpan, and underwear. Sikhs in military service, including the air force, can also wear a turban.

The Indian Navy allows men and officers to sport a beard, neatly trimmed, with a mustache. Men in the land forces or the police can sport a mustache but not a beard. Occasionally, under social circumstances or in regions such as Kashmir, an exception will be made for a policeman to grow a beard.

Women in civil services or private sector jobs can wear a hijab. Christian women and some men wear a cross prominently on a gold or silver neck chain.

Hindu men, including policemen, judges, university teachers and scientists, often wear marks of their caste, a tilak in vermilion, sandalwood paste or holy ash on their forehead. Religious threads on the wrists are a common sight in every field of social and official activity.

And many government schools and colleges have an altar with a statue devoted to Saraswati, the Hindu goddess of learning. In fact, in several stages, the Sangh Parivar has started putting pressure on Catholic schools to also have a statue of the goddess on the campus.

Will a hijab damage the campus environment?

3 Comments on this Story

CHHOTEBHAI
To my knowledge several Catholics have written in support of Muslim women to wear the hijab to school. In my hometown Kanpur Muslims often constitute 35% of the students in Catholic schools as they feel safe and accepted. Nevertheless we must condemn the myopic action of the Catholic institution in Vijayawada that banned the hijab.
Reply

DESMOND COUTINHO
The Catholic Church and Christians in India follow the principle of every man for himself and the devil take the hindmost. They used to back Congress as the party that gave them access to the leadership. These days they court the BJP. The hijab issue is more to do with the UP elections. The Catholic Hierarchy will continue to cosy up to those in power in India. John Dayal lives in the past like most old men. The Jesuits who might have spoken up and taken their colleges with them have now passed on. The baton is now carried by career priests and NGOs whose paramount concern is self-service. Why is John Dayal being so obtuse.

JOHNKUMAR
Agree with John Dayal, why Christians (if they are really standing for democracy then speak out express their views) keep silence, remain a mute spectator;Stand for democracy then you are inseparably for in support of secular fabric too; aren’t you? if hijab is religious expression, then there are so many other expressions in from offices, courts, and other public places where you take many things for granted; there are no different rules,as per public life; Well, it should disturb Christian consciousness, if it doesn’t then wonder what/how Christian are they, as they only claim to be? Kumar.
Reply