More than 20,000 people gather in Karnataka state to demand protection of secularism in the country 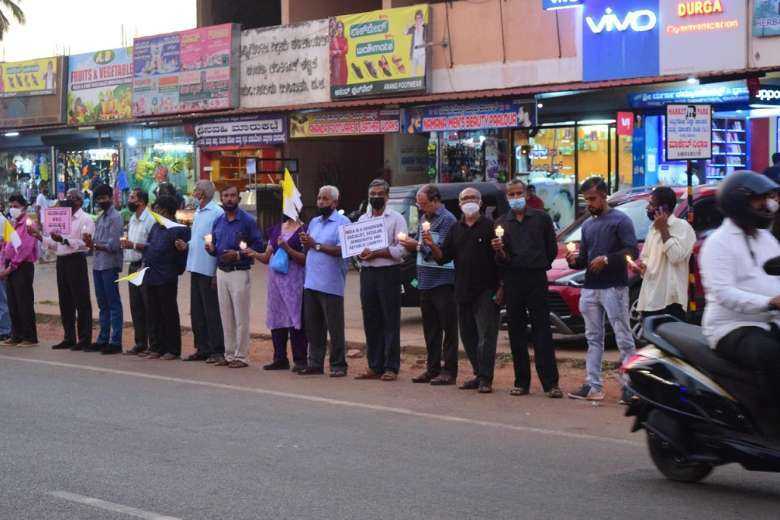 Catholics form a human chain in Mangalore Diocese on March 2 to protest an anti-conversion bill in Karnataka state and attacks on Christians.cffgfg (Photo supplied)

A diocese in the southern Indian state of Karnataka formed a human chain to protest attacks on Christians and an anti-conversion bill.

The protest in Dakshina Kannada district on March 2 organized by Mangalore Diocese also aimed to highlight the destruction of a 40-year-old Christian prayer hall in Kuloor and a statue of Jesus Christ in Kolar, Bangalore.

“It was a peaceful protest held in different places in Mangalore Diocese in which more than 20,000 people participated, prayed together and voiced their demand to protect secularism in the country as well as in the state,” said Father Faustine Lucas Lobo, spokesman of the Karnataka Catholic Bishops’ Council.

“If the Karnataka Protection of Right to Freedom of Religion Bill 2021 is passed, it may harm the fraternity and unity among different faiths leading to communal disharmony in the state.

“Most Christians say they fear the anti-conversion bill could be misused and the Christian community may have to face a lot hardships as a result. We are urging the state government to drop the bill which is a clear violation of constitutional rights.”

Christians across the district participated in a silent protest along roads and in public places for an hour.

Live and let live. Let’s uphold the constitution. We condemn the atrocities on peace-loving Christians

Each participant was holding a candle and a yellow and white papal flag. The protest was joined by many priests, religious sisters and brothers, children and youths.

The protesters held placards that read “Live and let live,” “Let’s uphold the constitution,” “We condemn the atrocities on peace-loving Christians,” “Equality with other citizens is our constitutional right” and “Don’t divide the country.”

People were also seen holding posters that declared “Religious freedom is our right,” “We have the right to worship the god we believe in,” “We are one. Do not divide us in the name of religion,” and “India is a secular country, respect it.”

In Mangalore and on its outskirts, the protest began at 6pm. Catholics gathered outside the church and formed a human chain along roads while maintaining social distancing.

In Moodabidri, Catholics from 14 parishes gathered at the district collector’s office from 10-11.30am under the leadership of Catholic Sabha and submitted a memorandum to the state's chief minister.

On Dec. 21, 2021, the pro-Hindu Bharatiya Janata Party (BJP) tabled the controversial anti-conversion bill in the state assembly, ignoring opposition from Congress and other parties.

A group of Christians staged a protest against the bill in Bengaluru on Dec. 22. They feared an increase in violence against them and attacks on their institutions if the proposed law comes into force.

Archbishop Peter Machado of Bangalore, who led the protest, told media that the anti-conversion bill is anti-Christian as it specifically targets Christians.

Similar laws have been introduced in Uttar Pradesh, Gujarat, Madhya Pradesh and Himachal Pradesh — all states run by the BJP.

Christians make up 1.87 percent of Karnataka’s population of 68.4 million.