Finding love and happiness in Japan 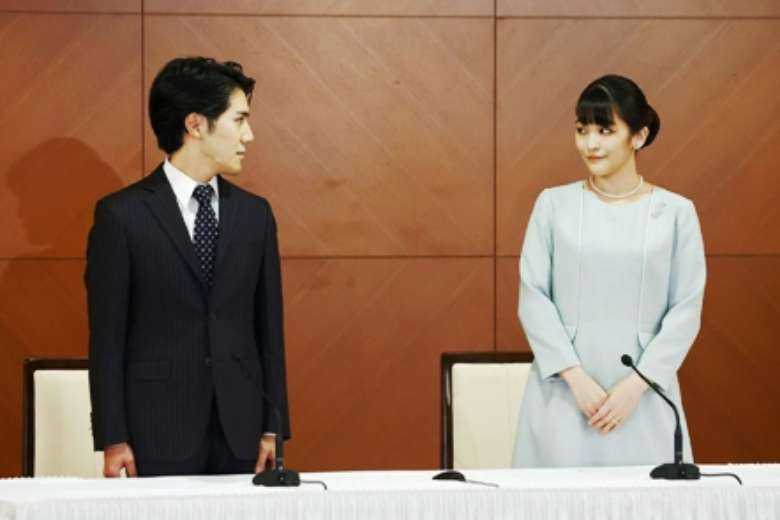 Japan's former princess Mako and her husband Kei Komuro pose during a press conference to announce they have married in Tokyo on Oct. 26, 2021. (Photo: AFP)

Could the formula for reversing the low birth rate in Japan be found in a handwritten prayer on the back of a wooden plaque?

For many Japanese, this is precisely the solution to root out all seeds of social frustrations.

We are not talking about a casually performed ritual or an on-the-spot invocation, but a standardized practice that must be rigorously obeyed, supported by amulets and lucky charms that act as a precise medium with the supernatural. Above all, it must be performed in a specific place, and only there.

They are the sanctuaries of en-musubi (long-term bond, marriage). The most important one in the Land of Rising Sun is the Izumo taisha (Izumo shrine). Those who arrive here are mainly former young people, who are singles with an urgency to get married.

The shrine, which many believe is the oldest Shinto shrine in Japan, is dedicated to Okuninushi, the Shinto deity of marriage.

The en-musubi shrines, Japanese believe, are locations of high mystical and positive power and prayers conducted in them for stronger relationships, such as marriage, will come true. “In the midst of an internal tourism recession due to the pandemic, this is the only category of faithful that has not given up travel,” says Imayoshi-san who runs a small Izakaya (drinking place) in the city of Izumo.

His most customers are single people who participate in the en-musubi ceremony at the Izumo taisha.

The frequency of the ceremony has now increased says 72-year-old Hiroshi Itou, who works as a volunteer custodian at the major sanctuary for the past seven years.

“Not many years ago, the ceremonies for en-musubi were held only once a year but now they have quadrupled,” he tells and adds, “most of them are women.”

According to statistics, only eight percent of women give birth after the age of 35 while men in the same age group have double the chance of becoming fathers.

So, how does this liturgy unfold for them?

“A handwritten letter must be sent to the shrine and if you are the one chosen during the holy week of kamiarizuki in October you come to the sanctuary, preferably not wearing anything in leather, too bright colors, or jeans. The ideal would be a black or white suit,” says Hiroshi Itou.

“First there is a preparatory passage to the sanctuary of purification,” he adds. The idea behind it is that you cannot go asking for a favor with a dirty body and soul.

The next step is to proceed toward a large place with five hundred seats aligned (pre-Covid they were 2,000). Here, the single people will silently attend a one-hour ceremony.

Then they receive the mihoghiito or bracelets that promote good ‘connections.’

Then follows the core of pilgrimage, the ema, which is the wooden plaque.

On the back of the ema, the single people will have to write their precise desires.

“I had already prepared it for weeks,” confesses a young Sakura, 25-year-old working a part-time job in a book store.

Daigoro Takata a 35-year-old and single male, came all the way from Saitama (Tokyo).

“I have a friend who strongly suggested me to come, as it apparently worked for him. He got married after a year.”

The ema are made public. First impressions can be misleading, but from the wishes expressed, one senses a majority of the singles are an extravagant lot.

“I want to meet an extraordinary man who has hair (sic!),” expresses another.

Still other reeks of stalking. The woman has engraved a man’s name, surname, and address, and wrote underneath: “I want to marry him!”

Among the would-be spouses is Elis Naonobu, 31, a biker who boasts a large fan following on Instagram.

“If you happen to be a strong independent woman in Japan you will have a hard time finding someone,” she laments.

But she does “believe in the power of the divine” and that by coming here her “probabilities will increase.”

Haruka Hirokawa a 43-year-old office lady, who has come to Izumo four times already, considers herself an expert.

“The he or she you want to meet will not necessarily be a lifetime lover,” she says adding they could be your “destiny.”

Her friend who finally got married after coming here is an example.

The marriage of Hirokawa's friend ended in divorce. But maybe she could have avoided a more tragic fate, like death itself, she says.