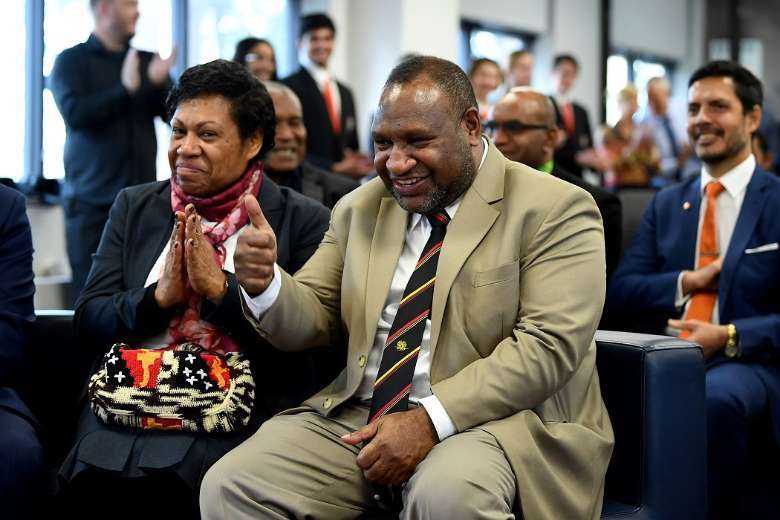 Papua New Guinea Prime Minister James Marape and his wife Rachael listen to a speech in Sydney during a visit to Australia in 2019. (Photo: AFP)

Every year thousands of young people graduate from universities and colleges across Papua New Guinea. Unfortunately, only a small percentage find work — the rest end up jobless.

Unemployment has grown to be a serious social and economic problem in the resource-rich nation of 9.2 million people. But over 40 percent of the population are struggling to meet basic daily needs.

The country has at least eight public and private universities, including the Divine Word University in Madang Archdiocese, and several higher learning institutions. Not to mention high schools and vocational institutions.

Reports estimate that at present nearly 3 million eligible workers are graduates of tertiary and secondary institutions. Regrettably, more than half remain jobless. It’s becoming more saddening when many of the available top jobs are reserved for expats.

It’s a paradox. On the one hand, the education system in Papua New Guinea is undertaking reforms. Every year tertiary institutions register a high number of enrollments. On the other hand, students are anxious about what to do after graduation.

Some fear that rising unemployment among the educated can lead to further social and political instability in a country that already has high records of violence. It’s feared that being jobless for a long time, without any income, will drive more people, even the educated ones, into criminality.

A recent report by the World Population Review, a US-based independent think-tank, ranks Papua New Guinea as having the world’s second-highest crime rate, just behind Venezuela.

Crimes in Papua New Guinea are primarily fueled by rapid social, economic and political changes, involving gangs that consist mainly of members with little education and few employment opportunities. They do not hesitate to attack, rob or break into residences.

In March last year, criminals stormed a convent in Alotau, a town in the southeast of the country, where 11 priests lived. Seven priests were severely injured, including a Filipino missionary who had to be hospitalized due to multiple head wounds. The robbers managed to steal laptops, mobile phones, cash and other valuables.

Unemployment poses a huge challenge for the administration of Prime Minister James Marape.

Last month Marape said the government had approved a US$6.2 budget, the highest in 46 years, to help boost the country’s development. He pledged to support urgent sectors such as health, education, small and medium businesses, agriculture and infrastructure, such as roads, to connect rural areas where 80 percent of the country’s population live.

There was no specific mention of ways to resolve unemployment, but the prime minister has opened doors to foreign investors to do business in the country and hire more local people.

In January, he visited China to secure bilateral deals and encourage Chinese investors to expand businesses in Papua New Guinea. He was supposed to visit France after the China visit, but it was canceled after Marape caught Covid-19.

At home, the government is reopening the controversial Panguna gold and copper mining site in Bougainville Autonomous District, owned by British-Australian firm Rio Tinto. It started operations in 1972 but was forced to shut down in 1989 following opposition from local landowners angered by pollution caused by waste.

Unfair revenue sharing was also an issue that led to a long period of civil unrest.

Gold and copper mining at Pananga was once the backbone of the country’s economy, so the government sees the current situation conducive to reopening the site to help with post-pandemic recovery and create more job opportunities for the locals.

The government continues to try and assure the public that it is doing its best to create jobs. Marape has urged graduates to start creating jobs, instead of looking for them, by managing whatever they produce on farms such as coffee. He is encouraging them to take out bank loans to start their own businesses.

It is understandable because the country ranks 17th in global coffee production and coffee is grown in almost every province by around 3.5 million people.

However, the prime minister’s call lacked substance and was nothing more than just an attempt to motivate young people to maximize their potential.

Limited access to agricultural products is another huge challenge for Papua New Guineans, not only in rural but even urban areas.

Civil society groups, including some Catholic leaders, have reminded the government that job creation is a primary task. Non-governmental sectors could help but they have limited resources to create job opportunities.

More jobs can be created if the government cooperates with all stakeholders, avoids political friction and corrupt practices which have ruined the country's economy and created social divisions.

Papua New Guinea has lost billions of state money to corruption. It is one of the most corrupt countries in the Asia-Pacific region. Marape has promised an all-out fight against corruption with the hope that more money is used to create more jobs and improve people’s economy.

The government, political parties and businesses should see unemployment as an emergency issue that requires a comprehensive and collective response. This will be especially so in the post-pandemic era, otherwise it will seriously hinder or ruin existing development and recovery efforts.