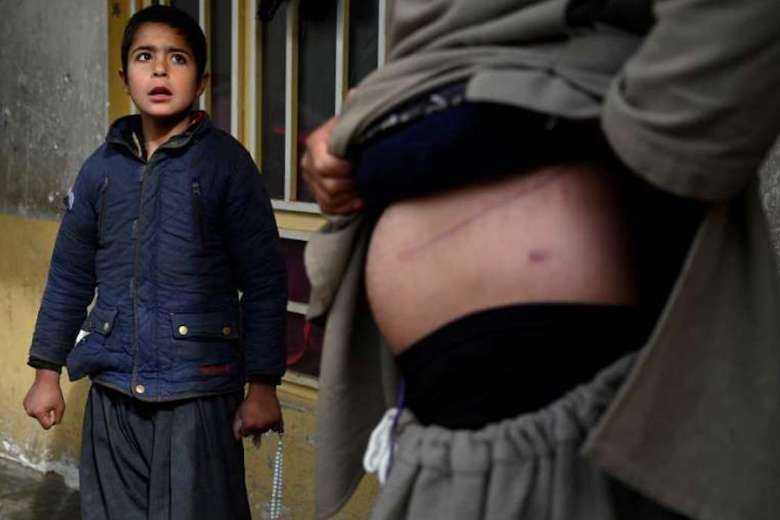 Nooruddin, who sold his kidney to raise money for his family, shows the scars from the operation next to his son Javid at their house in the Khwaja Koza Gar area in Herat. (Photo: AFP)

Jobless, debt-ridden and struggling to feed his children, Nooruddin felt he had no choice but to sell a kidney — one of a growing number of Afghans willing to sacrifice an organ to save their families.

The practice has become so widespread in the western city of Herat that a nearby settlement is bleakly nicknamed "one kidney village."

"I had to do it for the sake of my children," Nooruddin told AFP in the city, close to the border with Iran. "I didn't have any other option."

Afghanistan has been plunged into financial crisis following the Taliban takeover six months ago, worsening an already dire humanitarian situation after decades of war.

The foreign aid which once propped up the country has been slow to return, with the hardline Islamists also cut off from Afghan assets held abroad.

The trickle-down effect has particularly hurt Afghans like Nooruddin, 32, who quit his factory job when his salary was slashed to 3,000 Afghanis (about US$30) soon after the Taliban's return, mistakenly believing he would find something better.

I regret it now. I can no longer work. I'm in pain and I cannot lift anything heavy

But, with hundreds of thousands unemployed across the country, nothing else was available. In desperation, he sold a kidney as a short-term fix.

"I regret it now," he said outside his home, where faded clothes hang from a tree and a plastic sheet serves as a window pane. "I can no longer work. I'm in pain and I cannot lift anything heavy."

His family now rely on their 12-year-old son for money, who polishes shoes for 70 cents a day.

Noorudin was among eight people AFP spoke to who had sold a kidney to feed their families or pay off debt — some for as little as $1,500.

It is illegal to sell or buy organs in most developed nations, where donors are usually related to the recipient or are people acting out of altruism. In Afghanistan, however, the practice is unregulated.

"There is no law ... to control how the organs can be donated or sold, but the consent of the donor is necessary," said Professor Mohammad Wakil Matin, a former top surgeon at a hospital in the northern city of Mazar-i-Sharif.

Mohamad Bassir Osmani, a surgeon at one of two hospitals where the majority of Herat's transplants are performed, confirmed "consent" was the key.

"We take written consent and a video recording from them, especially from the donor," he said, adding hundreds of surgeries have been performed in Herat over the past five years.

"We have never investigated where the patient or donor comes from, or how. It's not our job."

The Taliban did not respond to requests by AFP for comment on the practice, but Osmani said the country's new rulers have plans to clamp down on the trade and are forming a committee to regulate it.

Afghans desperate for money are usually matched by brokers with wealthy patients, who travel to Herat from across the country — and sometimes even from India and Pakistan.

The recipient pays both the hospital fees and the donor.

Azyta's family had so little food that two of her three children have recently been treated for malnourishment. She felt she had no choice but to sell an organ, and openly met a broker who matched her with a recipient from the southern province of Nimroz.

Now her husband, a daily laborer, is planning on doing the same. "People have become poorer," he said. "Many people are selling their kidneys out of desperation."

On the outskirts of Herat lies Sayshanba Bazaar, a village made up of hundreds of people displaced by years of conflict.

Known as "one-kidney village," dozens of residents have sold their organs after word spread among destitute families of the money to be made.

From one family, five brothers sold a kidney each in the last four years, thinking it would save them from poverty.

"We are still in debt and as poor as we were before," said Ghulam Nebi, showing off his scar.

In developed nations, donors and recipients usually go on to lead full and normal lives, but their after-surgery health is usually closely monitored — and also dependent on a balanced lifestyle and diet.

That luxury is often not available to poor Afghans who sell a kidney and still find themselves trapped in poverty and sometimes in ill-health.

Professor Matin said only some donors arranged for follow-up checks. "There are no public health facilities to register kidney sellers and donors for regular examinations to check on implications for their health," he added.

Shakila, already a mother of two at 19, underwent the procedure shortly before the Taliban seized power, bypassing a broker by searching out a patient at a Herat hospital.

"We had no choice because of hunger," she said, made up with black eyeliner with a scarf covering the rest of her face.

She sold her kidney for $1,500 — most of which went to settle the family's debt.

Mother-of three Aziza, meanwhile, is waiting for her opportunity after meeting a hospital staffer who is trying to match her with a donor.

"My children roam on the streets begging," she told AFP, tears welling. "If I don't sell my kidney, I will be forced to sell my one-year-old daughter."