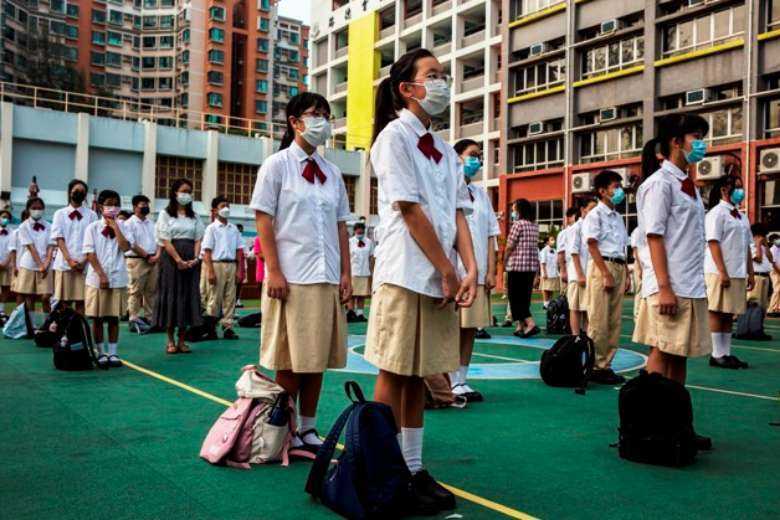 Students watch a flag-raising ceremony ahead of the National Day of the People’s Republic of China at a school in the Yuen Long district of Hong Kong on Sept. 30, 2021. (Photo: AFP)

School education, the last bastion of the pro-democracy movement in Hong Kong, is falling asunder like the beads of a broken necklace.

The blood-red flag with five yellow stars flutters in the air on campuses in Hong Kong as it did in mainland China following the Tiananmen Square protest in 1989.

Students in Hong Kong are getting familiarized with patriotism with Chinese characteristics because there are still black sheep in universities and schools whose capitalist hearts have to be won over before they initiate the long march to socialism.

University and high school students made up the majority of protesters in 2019 and teenagers represented almost a fifth of the 10,000 arrests made as part of the crackdown, according to data by Bloomberg.

A study published in the Journal of Contemporary China on Jan. 30 found the ability to question the state and its leadership is greater in Hong Kong than in mainland China, which proves those remnants of the erstwhile pro-democracy movement are still active and ticking.

For the party leadership, this intelligent, socially aware and politically informed population is a stumbling block for cultural assimilation and should be dealt with to prevent future uprisings for more freedom and democracy.

At the direction of the education bureau in Hong Kong, a new flag-raising etiquette has come into force

Starting from 2022, all public schools in the city are mandated to follow the new policy on raising the national flag and singing the national anthem so as to enhance students' “sense of national identity."

At the direction of the education bureau in Hong Kong, a new flag-raising etiquette has come into force, and following legislative changes the casual disposal of the Chinese flag has become a crime.

Offenders against China’s March of the Volunteers, the national anthem, will have to shell out a hefty fine of HK$50,000 (US$6,420) or face a three-year jail term.

The school curriculum, which appeared in different names such as moral education, moral character education, patriotic education and citizenship education over the years, aims to make citizens loyal to the country and urges them to put in check their individual goals for the collective, socialist good.

School managements have fallen in line with the new policy. Almost 200 Catholic primary, middle and high schools under the Diocese of Hong Kong decided to follow the Chinese way to shed their pro-democracy leanings.

In a statement two years ago, the episcopal delegate for education in the diocese urged students to “foster the correct values on their national identity.”

The statement also warned against “politicization” and the “unilateral promotion of political messages” against the communist leadership.

Last August, China made its presence felt in the university education system by disbanding Hong Kong’s largest teachers’ union after accusing it of spreading anti-Beijing and anti-government sentiment. The Professional Teachers’ Union was the largest single-industry trade union with 95,000 members.

The education system in Hong Kong, representing a hybrid of British and Chinese traditions, is put on vibrant cultural assimilation that seeks to marry its intensely capitalist outlook with the communist system to forget the good old days promised under the "one party, two systems" framework.

The culture of inertia and cynicism fostered by educational institutions in Hong Kong towards the communist party’s political system, which finally culminated with the 2019 youth uprising, is withering away.

Its place has been by patriotism, which teaches that a good citizen is one who is loyal and obedient to the Chinese Communist Party — a tried and trusted formula experimented on the mainland more than three decades ago.

After crushing the Tiananmen protest, China began a patriotic education campaign on the mainland in 1991, constantly reminding students of China’s “century of humiliation” and the Communist Party’s role in restoring national sovereignty.

The project has been incredibly successful as nationalistic sentiments are too strong among young people in China.

It is simple: the government imparts students only the information it wants them to have and blocks all other information.

China, which made Hong Kong a special administrative region in 1997, took the sheen out of the largest pro-democracy movement in the former British colony in 2019 by implementing the sweeping national security law in June 2020, which prevented civil society’s "collusion with foreign forces" forever.

The Legislative Council, another pro-democracy stronghold, has been reduced to a scarecrow with new election laws that reduced the number of directly elected lawmakers and gave leeway to the pro-Beijing committee to nominate lawmakers aligned with Beijing.

China has already clipped the wings of pro-democracy news outlets in Hong Kong. Stand News, the only Hong Kong-based media outlet to work with a global consortium of news organizations, was forced to shut down along with popular news newspapers like Apple Daily and Citizen News. Apple Daily’s Catholic owner Jimmy Lee is still facing many court cases.

With the policy of instilling patriotism among students in schools and universities, China is on a firm path to turning Hong Kong into a communist bastion for generations to come.

The Catholic Church in Hong Kong has to survive while serving a population that trusts in communist principles and efficiency. It is a strange reality of the troubled Chinese territory.