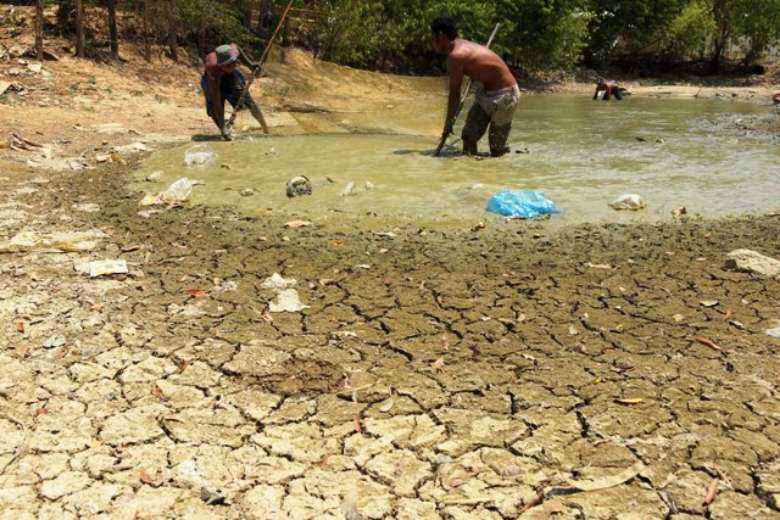 Cambodian men use a net to catch fish in a nearly dried pond at a village in Kandal province during a drought in April 2016. (Photo: AFP)

Cambodian authorities are blaming a three-year drought and five years of record low water levels in the Mekong River for water shortages and lack of clean water in Phnom Penh and nearby provinces.

“As we all know, we don’t see Cambodians complain about the lack of water during the rainy season, but when the dry season starts in January, we are not able to pump enough water from the river. Only after this period can we pump enough water,” he said at a press briefing.

The drought has also resulted in muddied water creeping into the distribution network.

Environmentalists say the drought, just entering its fourth year, has been exacerbated by climate change and massive upstream dam construction in China and Laos where governments have been accused of water hoarding.

According to the US-based Stimson Center, 11 dams that block the mainstream of the Mekong in China and Laos have been completed. Another 118 dams have been built along its tributaries.

Water shortages have prompted the Cambodian government to call for people to use water sparingly, particularly in rural areas, saying the rainfall from the recent wet season “will not be enough to meet the immediate needs.”

A separate report said water capacity for irrigation in Cambodia is operating at just 20 percent.

Long Naro said there was a current shortage of between 1,000 to 2,000 cubic meters of water per hour at the treatment facilities that impacted the constant supply of clean running water in Phnom Penh, nearby Takhmao town and in neighboring Kandal province.

He said the situation should improve within a year after the completion of several new clean water facilities by January 2023.

The Mekong River Commission (MRC) has urged the six Mekong countries — Cambodia, Laos, Myanmar, Thailand, Vietnam and China — to address “regional low flows, water fluctuations and drought” that have produced the worst conditions along the Mekong in more than 60 years.

In its latest report, "Mekong Low Flow and Drought Conditions in 2019–2021," the MRC found that since 2015 the hydrological regime had changed, with more dry season flow and reduced wet season flow caused by increased storage reservoirs in the Mekong basin.

About 65 million people depend on the Mekong River for their livelihoods.

According to the report, 2020 was the driest year as rainfall was below normal levels in every month except October and it said more action was required “not just from China but from all the MRC member countries to jointly address these issues.”