Government warned against destruction of livelihoods along with the sea, coast and marine life due to environmental threats 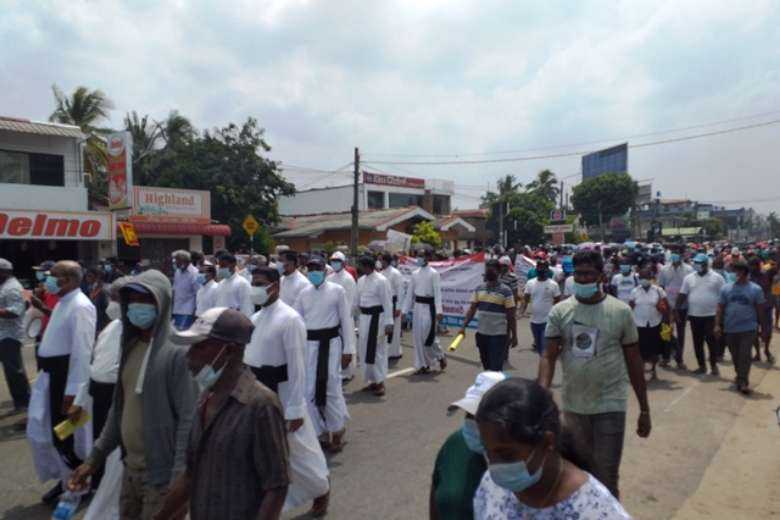 Bishops and priests walk with fisher people protesting the destruction of their livelihoods along with the coast and the sea in Negombo, Sri Lanka, on March 3. (Photo: UCA News)

Bishops and priests joined fisher people in Sri Lanka on March 3 to demand protection of their livelihoods from destructive development projects that were harming the coast and the sea.

Sebastian Fernando, a leader of local fishers, said: “The sea bed has been eroding for years. The people are constantly complaining but the authorities have not paid attention to their demand for a permanent solution.”

He said the sand being pumped to fill the east and west jetties of Colombo port was having a huge impact on fishing in the country. Seaweed and ornamental fish are greatly affected.

“The disaster-struck X-press Pearl ship also caused great damage to our marine environment but fishermen did not receive fair compensation,” said Fernando, referring to the environmental disaster unleashed by a cargo ship carrying chemicals that caught fire off the coast of Sri Lanka in May 2021.

Several containers have washed ashore from the X-press Pearl and nitrogen oxides have been released into the air and sea in large quantities, exposing the island nation to acid rain in the future, say experts.

Environmentalists have warned that the chemicals inside the containers could enter the seawater and pose a threat to the marine life system in the short and long term.

There is no way for fishermen and their families to survive now. We do not have the financial strength to send our children to school now

The Catholic Church in Sri Lanka has repeatedly urged the government to compensate fishing families for their loss of livelihood and restore the environment.

The prelates and religious men and women joined the fisher folk from various parishes in Negombo on the west coast, joining them in raising slogans and holding placards highlighting their demands.

A large police force accompanied protesters as they walked the streets, leading to heated arguments when they tried to stop them from proceeding on their protest route.

The fisher folk raised slogans against the increase in the price of fishing equipment and fuel. “Oil prices are also taxed. No oil to go to the sea. Our children are in hunger,” they shouted.

Rohini Peiris, who accompanied a fisher women’s group, said that their men were no longer able to fish daily due to the increase in fuel prices.

"There is no way for fishermen and their families to survive now. We do not have the financial strength to send our children to school now," she said.

Bishop J.D. Anthony, auxiliary bishop of Colombo, urged the government to resolve the issues being raised by fishermen as soon as possible.

"Cardinal Malcolm Ranjith has informed us to be with the fishermen at this moment," he said.

15 Comments on this Story