Slavery, one of the worst forms of degenerating human dignity, is part of the modern world despite its abolition more than 150 years ago 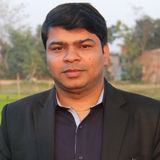 A laborer bounded to a brick kiln owner in Pakistan taking care of his children inside their mud house. (Photo: ucanews.com)

No other living beings enslave and abuse their own species, but the tragic story of human slavery continues unabated and spans both centuries and generations.

The world has more slaves today than ever before thanks to various state and non-state actors and factors that reap economic and non-economic benefits by forcing fellow humans into slavery and denying them freedom, dignity and all opportunities for development.

The British parliament’s Slavery Abolition Act in 1833 and the US government’s 13th amendment to the constitution in 1865 were pivotal moments in world history. But slavery was never abolished in the true sense; it just morphed into various forms to plague the lives of millions.

Some 40 million people or one in every 200 people are languishing in slavery across the globe, according to the International Labor Organization. This might well be a conservative figure as many forms of slavery are invisible and largely unreported. Yet the figure is more than three times higher than the roughly 13 million people captured and sold as slaves between the 16th and 19th centuries in the transatlantic slave trade.

About 70 percent of slaves are women and girls, while children account for 25 percent or 10 million slaves worldwide, according to the global slavery index.

It is no secret that slavery is a highly lucrative business in the modern world that generates as much as US$150 billion in profits every year.

There is no universally accepted definition of slavery. In broad terms, slavery is a condition or practice that people accept against their will, ranging from forced labor, debt bondage, forced marriage and human trafficking to the commercial sex industry.

Asia, the hub of modern slavery 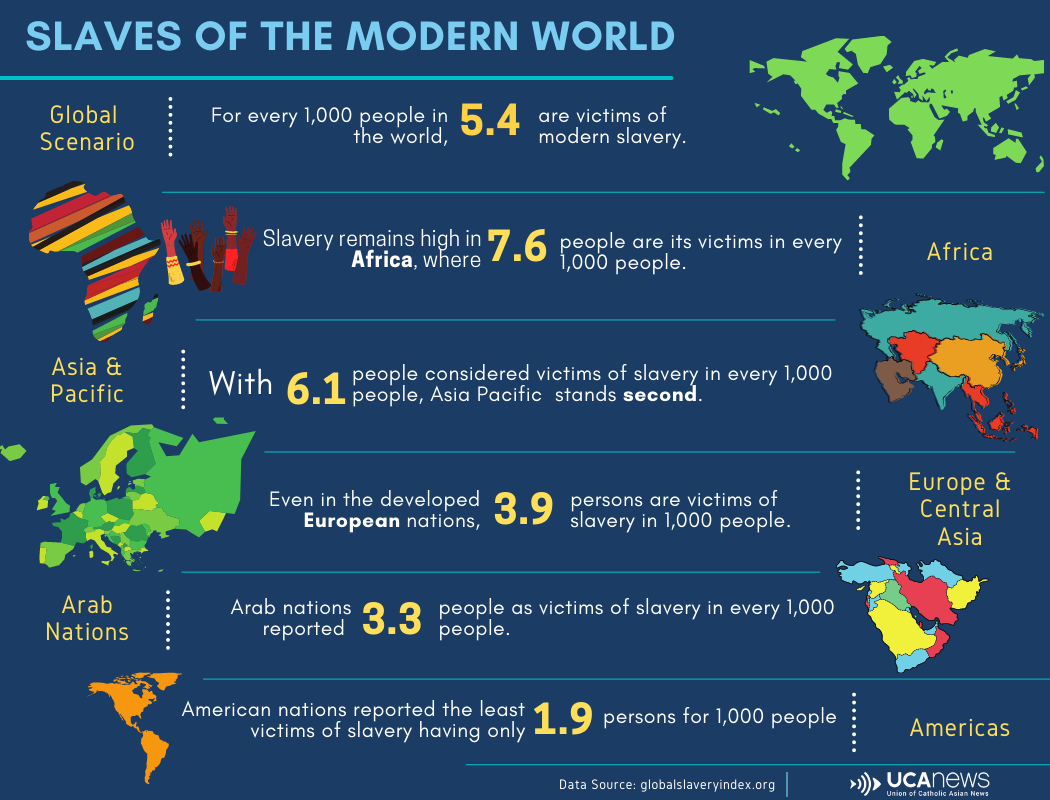 The home of about 60 percent of the global population, the Asia-Pacific region is also the largest hub of slavery as it accounts for about 24.9 million men, women and children living in slavery, according to Walk Free Foundation.

Most of the 10 countries with the highest levels of modern-day slavery are in Asia.

China, the Democratic Republic of Congo, India, Indonesia, Iran, Nigeria, North Korea, Pakistan, the Philippines and Russia account for more than half of the world’s population and comprise 60 percent of modern-day slaves.

Why does Asia-Pacific have such high numbers of people in slavery or slave-like conditions?

Endemic poverty, unsafe migration, weak governance and abuses of cultural practices, are all blamed for fuelling slavery in Asian nations. But a major driving force is a lack of anti-slavery legislation in many countries, which means one cannot be prosecuted and punished in a criminal court for putting another human being into slavery.

Some 94 out 193 member states didn’t pass laws prohibiting slavery despite the 1948 United Nations Universal Declaration on Human Rights, which calls on member states to abolish slavery. Most of these countries are in Asia.

Most Asian nations have anti-trafficking and labor laws but such legislation does not necessarily address slavery. Discriminatory social and cultural practices in many of these countries have validated slavery in the public psyche. 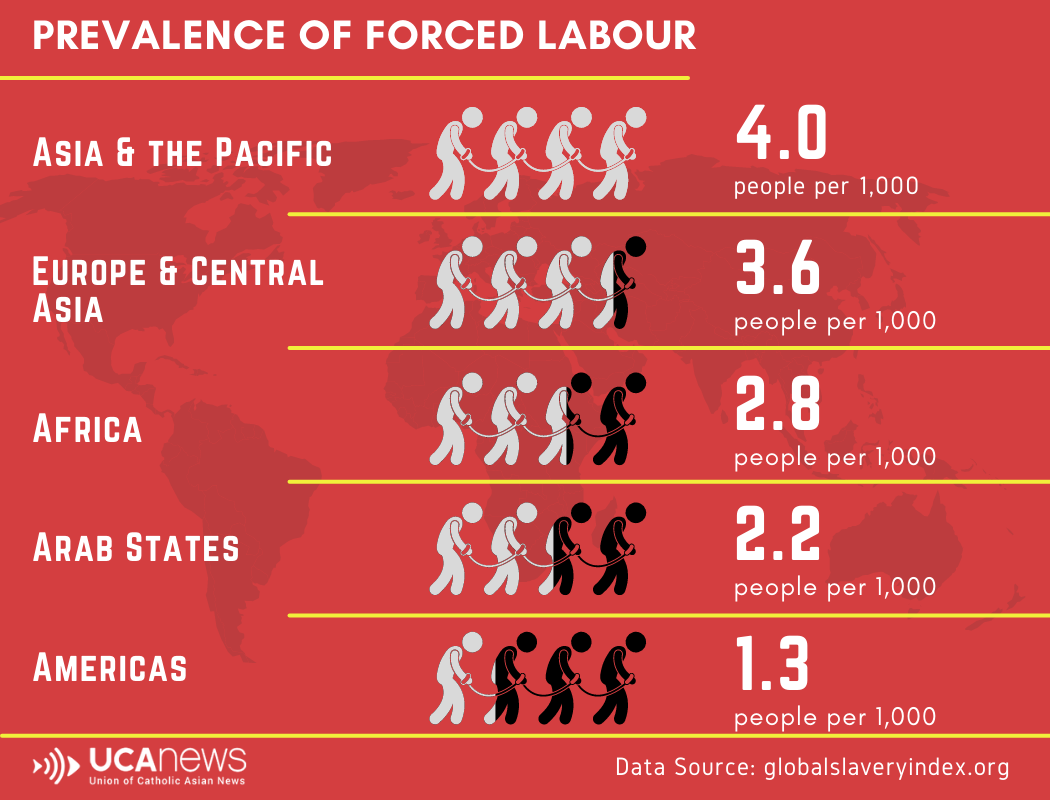 Source and destination of trafficking

Asia is both a source and a destination of human trafficking, one of the many forms of slavery.

Global supply chains for agriculture, construction, fishing, clothing, fashion, beauty and the sex industry are feeding grounds for trafficking. The global sex industry has some 4.5 million women and girls trapped in perpetual slavery and about two-thirds of them are in the Asia-Pacific.

Every year, tens of thousands of poor young girls and women from relatively impoverished regions like South Asia are trafficked and sold into the sex industry in well-off countries in Southeast Asia, East Asia, the Middle East and even Europe.

Sex trafficking can often be insidious as the victims are coerced and trafficked from poorer districts by organized crime syndicates and forced into commercial sex services in wealthy areas. From the Philippines, Thailand, Cambodia, Laos, Vietnam and Indonesia to Myanmar, China and India, many young girls and women end up as sex slaves in glittering bars, brothels and other facilities, both in their home countries and abroad.

Other forms might vary from country to country in Asia but modern-day slavery can be categorized into child slavery, forced labor, bonded labor, forced marriage and descent-based or ancestral slavery — handed down from ancestors.

India is home to the largest numbers of slaves, ranging from 14 to 18 million with women and girls making up the majority. The nation of more than 1.3 billion is a major source country for sex trafficking to Southeast and East Asia and a prime destination of sex trafficking from other South Asian countries. According to a 2017 study, India has around 16 million sex workers and about 37 percent are minors.

Sex slavery is common in other South Asian countries like Pakistan, Bangladesh and Nepal. Prostitution is technically illegal in religiously conservative Pakistan and Bangladesh, but they have brothels with most workers being victims of sex trafficking, forced and unequal child marriages, rape and sexual abuse, and a handful inherited the profession from their mothers who lived and died in brothels.

Decades of a one-child policy created a massive gender imbalance in China and many young women from Asian countries are trafficked to the communist state in the guise of marriage where they are treated as sex slaves, not to mention those trafficked into the sex industry.

A common and cruel form of modern-day slavery in South Asia is debt bondage. Under this unlawful and humiliating system, men, women, children and even entire families are enslaved by the debt holder to repay debts through endless labor. The debt holder often squeezes laborers with psychological pressure and physical violence, denies freedom of movement and offers a lump-sum amount that is never enough for survival. A bonded worker remains enslaved until death.

Another aspect of slavery in Pakistan is forced child labor. According to the Asian Human Rights Commission, some 20,000 disabled children are forced into begging on the streets by crime rackets.

About 152 million children, or one in every 10 children in the world, are forced to work against their will in various sectors including hazardous industries, says UNICEF. Fishing industries in Myanmar, Thailand and Indonesia have thousands of unpaid slave workers including children who are victims of domestic and transnational trafficking. In conflict-torn countries like Myanmar, ethnic rebel groups are often accused of recruiting children as soldiers through tough training and forcing them into fatal wars with the military. Even the military is also accused of using child soldiers. In the Philippines, many poor children are used as carriers for illegal drug trafficking, largely because children cannot be prosecuted or punished as per the law of the land. Thus, children often become the collateral damage of gang wars, while President Rodrigo Duterte's deadly anti-drug war also saw the killing of children accused of drug trafficking.

In tea plantation hubs in Bangladesh and Sri Lanka, an extreme form of ancestral slavery has been highly prevalent since British rule when commercial tea cultivation started. The British tea planters brought in thousands of poor laborers from British India by coercing them with better jobs and lives.

Slavery and the Church

Catholic and Protestant Churches including church-based social action organizations like Caritas have joined with rights groups and the government in the battle against some forms of slavery in the past decades.

The Church’s efforts mostly addressed human trafficking, which Pope Francis described as a crime against humanity. Other forms of slavery the Church is tackling are bonded labor, child labor and exploitation of migrant workers in rural and urban areas.

Among the major global and regional Catholic anti-trafficking alliances are the International Catholic Migration Commission (ICMC) and Talitha Kum, a Vatican-sponsored internal anti-trafficking network. The groups have linked with the Catholic Church and charities in Asia to tackle trafficking through campaigns of prayer, prevention, protection, prosecution, policy and partnership.

The Anglican Alliance is also a major anti-trafficking body of Protestant churches covering the Asia-Pacific region.

Despite such forums and activities, the Church’s efforts in tackling modern-day slavery in Asia have yielded little fruit, largely because Christians are a minority in most parts of Asia and the Church’s organizational strength is too little compared to the overwhelming number of people living in slavery. Yet the Church and church groups must make anti-slavery campaigns an eternal priority to make people aware and vocal against all forms of modern-day slavery.

Governments should stop turning a blind eye to slavery and must put in place necessary mechanisms including legislation to eradicate practices that enslave people.

It might be too much to expect the businesses that reap profits from slave labor to let it go. But consumers can play a role. They should be made aware how global supply chains keep enslaving people and boycott businesses where slaves make clothes and food or catch fish and offer services.

As long as slavery exists in the world and unfortunate people remain trapped in the vicious cycle, we too are complicit in this crime against humanity.