Timor-Leste, the predominantly Catholic country in Southeast Asia, goes to the polls on March 19 to elect a new president. The influential Catholic Church wants to ensure a “transparent and free” election.

Salesian Archbishop Virgilio do Carmo da Silva of Dili, in an exclusive interview with UCA News, shared issues affecting the Church in the tiny country of 1.3 million people, 98 percent of them Catholics. Protestants and Muslims share the other 2 percent equally.

The Portuguese brought the Catholic faith to the nation that occupies the eastern half of Timor island in the 16th century. Indonesia occupied it in 1975 after the Portuguese left.

Timor-Leste became a free and democratic nation after decades of struggle for independence after an UN-sponsored referendum at the beginning of the current millennium.  But two decades after political freedom, the nation continues to face crippling poverty, corruption, and political uncertainty.

Pope Francis is expected to visit the country soon amid political uncertainty that continues to threaten democratic freedoms and values. The 54-year-old archbishop says the Church — which serves Timor-Leste under three dioceses of Díli, Baucau, and Maliana — keeps reminding politicians of the need to have a free and democratic nation.

The following are excerpts from the interview

UCA NEWS: How important is Pope Francis’ expected visit for the local Church as it comes after, hopefully, a new government is in place?

"Since it is the celebration of all, we have to avoid all attitudes that will contribute to violence and foster a friendship that will nurture freedom and respect each other during the campaigns"

How is the Church helping the nation to ensure the upcoming presidential election is credible?

Every time, whether it is the presidential or parliamentary polls, the National Commission for Justice, Peace and Integrity of Creation (JPIC) is responsible for recruiting people to represent the Catholic Church and observing the entire process of the election — campaigns, polling and counting of votes.

The Bishops' Conference Episcopal of Timor (CET) also released a pastoral letter for this election. It was read out on Sunday, March 6, in all the parishes of the three dioceses. It was also read again in parishes on March 13, the Sunday before the election. We also observed it as a day of prayer for a responsible and peaceful election.

Sixteen candidates, the highest number in the country’s history, are in the fray for the presidency this year. What is your message for them?

The presidential candidates seem to be representing various age groups and generations. We have old and young, men and women, founders of the country and new generations to contest. It is an invitation to all sections of society to participate in this celebration of democracy. Since it is the celebration of all, we have to avoid all attitudes that will contribute to violence and foster a friendship that will nurture freedom and respect each other during the campaigns.

The Church invites all the citizens to know the candidates and their political commitments, especially during the campaign. Only by knowing the candidates well can onemake an informed decision on whom to vote for. The Church too exhorts all the candidates to avoid attacking each other and promote harmony and respect among themselves.

In the pastoral letter, the bishops said that during the election campaign all citizens should work “with love, since all these for the good of all.” Inspired by the words of Pope Francis on politics, the bishops added that “… those who exercise politics with love will discover that politics is a way leading to the good of all, is not seeking the power and fame.”

What is your assessment of the political situation now? Is it becoming better or turning from bad to worse?

Compared to the first elections after the restoration of independence (2002), the 2017 presidential election and the parliamentary election in the following year were peaceful. We must admit that there is a gradual transformation in the people’s understanding of democracy. They are learning the beauty of democracy through experiencing it. Many people believe that during this period of transition, society was growing to democratic maturity. And that does not overlook the misunderstandings and conflicts among the political leaders or parties.

With confrontational politics often threatening democracy, are you worried that Timor-Leste is on the road to authoritarianism?

The Church continues to remind the politicians and the larger society, particularly during the elections, about the importance of democracy. The latest pastoral letter is an example. It said that the “Democratic Republic of East Timor (RDTL) is the official name written in the constitution of the republic. These two words are full of meaning for us as a nation and as a state … as the Democratic Republic of East Timor state has to respect the interest of the people.”

East Timor is a new country. It was born just two decades ago.  Certainly, we were learning during these years to be faithful to our constitution. However, we cannot avoid influences that are coming from the authoritarian countries in the region.

Recognizing what is going on the bishops stress the value of democracy. For example, the pastoral letter said that “East Timor as a democratic state has to show, in all its political activities, coherence in defending the dignity of the state in the world … we need to set up a platform in order to gather our diversities. This is a way to build a conscientious national unity.”

Despite Catholics dominating social and political life, corruption thrives. How does the Church look at corruption in Timor-Leste?

We cannot deny that there is corruption in the country, though the government through the Anti-corruption Commission is working hard in order to control the spreading of corruption.

More than half of the population of this country are children and young people. We believe poverty can be cured only by providing good education to all and especially to those in the peripheries. This is one of our strategies. We are building up good schools in our parishes. Catholic religious congregations, both men and women, are major supporters in the project. As a matter of fact, most people occupying important posts in the country are educated in Catholic schools.

The Church played a decisive role in the freedom of your country. Are you in communication with its present leaders with an aim to improve the living conditions of the people?

Most politicians and especially those who are in the government are Catholic. Often church leaders formally and informally meet with them. There is no problem with communication but unfortunately there is a lack of political will to implement policies aiming at the welfare of the poor. However, without despair, we continue to encourage them to pay attention to those who are poor and forgotten.

The country's first Catholic university was opened last December. What is the state of education in Timor-Leste, particularly of school-age children?

The Timorese Catholic University (UCT) is the first Catholic university in the country. It is trying to offer quality education for future Timorese society. Though our facilities are limited, we are hopeful to cooperate with various Catholic universities in Asia as well as the world to make our dream come true.

Timor-Leste, just like any other country, is committed to providing education to all children aged between 6 and 12. There are also junior as well as senior high schools. The government in these decades has been trying to open schools in many places. But our dream of providing quality education to all remains a challenge.

How can the global Church help Timor-Leste? Do you think local churches in Asia can do better by sending personnel and resources?

We are predominately a Catholic country and that makes us proud. Though geographically we are far from other Catholic countries, we are enjoying good relationships with them.

Our dream is to consolidate the faith of the local people, which has been planted more than 500 years ago. We owe a lot to men and women missionaries who have worked tirelessly all these centuries to evangelize and educate the Timorese people. Looking back, we realized that the seeds they sowed did not fall on rocky land. In order to foster and nurture our faith, we need the support of others and, in fact, we are receiving it in various forms. 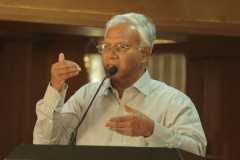 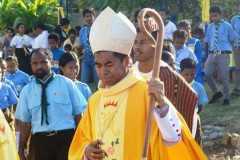