A mission to prevent lonely deaths in South Korea 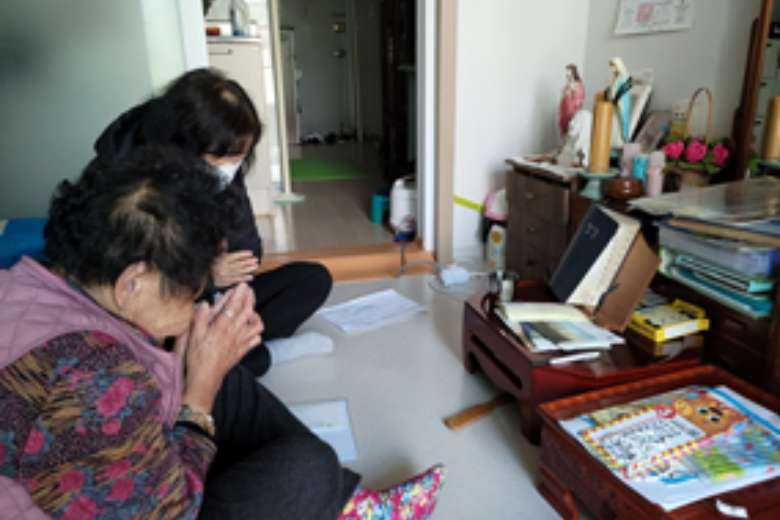 Each month, Sophia Cho Soon-hee leads a team of Catholic volunteers to visit every lonely elderly person in Gwangan Parish in Busan of South Korea.

“We visit all the lonely people and provide them with emotional care,” says Cho, vice-president of St. Vincent de Paul Society in Busan Diocese.

Over the past five years, she has also been in charge of the diocese's Lone Death Prevention Movement that seeks to prevent the lonely deaths of elderly people, a rising phenomenon in the East Asian country.

“Until last year, we have discovered and supported 27 lonely elderly people who risked death caused by lack of care. We visit them to provide food and necessary care services,” Cho said.

Since 2018, some 23 St. Vincent de Paul units in 11 Catholic dioceses of South Korea have made similar efforts to tackle increasing lone deaths.

Data from the Ministry of Health and Welfare shows South Korea recorded 3,159 lonely deaths in 2021. The figure was more than three times higher than the 1,025 lone deaths in 2012. Analysts say the sharp rise is also a result of the Covid-19 pandemic and last year’s figure was a conservative estimate as the pandemic made it difficult to discover the bodies of lonely people.

There have been reports in the media about lonely elderly people dying at home and their bodies being left unattended for a long time.

On Jan. 2, police from Dongjak district in Seoul found a man in his 50s who had died alone in the semi-basement room of a multi-story building.

Last year Suwon Diocese and Suwon City administration paired up to ensure dignified burials and memorial ceremonies for those who die lonely deaths and have no relatives to claim their bodies or to perform final rites. Until then, such people had been cremated by the government, mostly without religious rites.

The government passed the Lone Death Prevention and Management Act in April last year. The new law requires national and local governments to provide lonely people without relatives with all possible support and care, and to arrange for timely and proper burials on their deaths.

Government data also showed people in their 50s and 60s had the highest number of lonely deaths after suffering economic and emotional problems due to loss of jobs, unemployment and family breakdowns.

Church officials say solidarity is key to preventing deaths from loneliness. This was emphasized when local churches launched the Lone Death Prevention Movement in collaboration with Vincentian groups.

Father Joseph Chung-yeol, director of the pastoral commission for the poor in Seoul Archdiocese, noted that the Church’s social welfare division had joined St. Vincent de Paul Society to visit people who risk dying alone and provide them with food and all other pastoral services.

The archdiocese opened a center for lonely and elderly people in 2019 in the Daehak-dong area of Seoul. The death of a single mother and a child of a North Korean refugee that year prompted the Church to start the Daehak-dong Project.

“Middle-aged people who come here are often cut off from relationships because they think they have failed on their own,” said Father Lee Young-woo, who is in charge of the center.

“The most important thing is to personally encounter them and inform them the Church is with them.”

“Providing care and love for lonely people is an essential ministry of the Church today. However, it is important to offer systematic care by discovering and expanding scopes of services,” he said.

Despite South Korea being a developed country, about 16.7 percent of its citizens lived in poverty in 2019, according to the Organization for Economic Cooperation, which ranked South Korea fifth among 33 developed nations for relative income poverty.

This report uses material from a Korean-language report published by Catholic Times of Korea here.