The diocese of Trincomalee covers 2,727 square kilometers comprising the civil district. Trincomalee is derived from the Tamil name Thiru-kona-malai, meaning "Holy-East Hill". Hindu civilization flourished here during the reign of the South Indian emperors of the Chola Dynasty.

Trincomalee is a port city on the northeastern coast of Sri Lanka, about 257 kilometers northeast of Colombo. The town is built on a peninsula, which divides the inner and outer harbors.

Trincomalee diocese is adjacent to Jaffna in the north, Colombo in the west, Galle in the south, Kandy in the central region and Kurunegala.

Trincomalee has one of the world's finest natural harbors and can accommodate large vessels. This fact led to Trincomalee being captured in turn by the Portuguese, Dutch, French and British from the 16th to the 19th centuries.

It is an important trading city between Sri Lanka and the outside world. Trincomalee lies in the region of Sri Lanka where most of the population is Tamil and Islam by religion. Trincomalee and its environs are sacred to Hindus as well as Buddhists. Tiriyayi, 47 kilometers north of Trincomalee, is a place of Buddhist interest. The ruins of an ancient Buddhist monastery have been discovered here.

Ancient ruined temples, beautiful beaches, lagoons, hot springs, vast agricultural lands and tourist hotels can be seen here. The town also has the largest Dutch fortress in Sri Lanka. Trincomalee enjoys warm weather all year round. Trincomalee diocese was one of the places hardest hit by the 2004 tsunami.

The diocesan area is well connected by roads and railways.

The climate is pleasant with an average temperature of around 27 degrees Celsius, influenced by two monsoons: the southwest monsoon prevailing from May to September, and the northeast monsoon from November to February.

The rainy season lasts from October to December. High temperatures and low rainfall characterize the climate. Monthly temperatures range between 26.5 and 30 degrees Celsius, with highs normally recorded between May and August. The diocese receives nearly 60 percent of its rainfall during the northeast monsoon, which lasts from October to December. 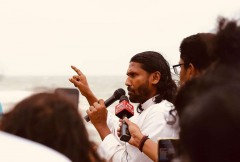