The diocese stretches over a land area of 3,952.1 square kilometers. "Mannar" means "deer river" or "silt river." Mannar has an ancient port known as Manthai or Mathoddam, meaning "mango garden." The main feature of the town is this Portuguese fort. Malwattu Oya, the second longest river in Sri Lanka, runs through Mannar.

Mannar is part of the "Catholic belt"' extending from Negombo to Jaffna. The Portuguese first arrived in Colombo and established Catholicism in areas around Chilaw. They also expanded. Thus, the whole Gulf of Mannar can be called a "Catholic belt."

Fishing is a major contributor to the local economy of Mannar. It provides the principal source of livelihood for a large portion of the population.

The civil war in the northern and eastern regions over the last 25 years have resulted in displacement of people and destruction of a large segment of Mannar. The Government Agent's (GA's) office in Mannar estimated the population of the district as 97,101. This figure includes 5,276 displaced families (21,632 individuals).

A large number of houses were damaged or destroyed during the conflict which began in 1983. More than half of the houses were completely destroyed. The education sector has been badly affected by the conflict. Though 90 of 111 schools are functioning, many of the original structures of the schools are damaged or destroyed.Bishop Joseph Rayappu heads the Mannar diocese, which covers the districts of Mannar and Vavuniya. The diocese is in the predominantly Tamil area, which is being bitterly fought over by the army and the Tamil Tiger rebels.

The Catholic diocese of Mannar dedicated to Our Lady of Madhu. The Madhu shrine is one of the ancient churches in Asia.

Mannar diocese was founded on Jan. 29, 1981, and is located in northwestern Sri Lanka. It is adjacent to Jaffna in the north, Chilaw in the south, and Trincomalee in the southeast.

Some 400 years ago, a Tamil king in Sri Lanka killed 600 Tamils including women and children who had converted to Catholicism. These people are known as the Martyrs of Mannar.

Mannar is located in the driest region of the country. For a variety of reasons, many areas in the district suffer shortages of drinking water.

Standard Tamil language is in use

Geographically, most of Mannar is on the mainland, within the arid and dry zone characterized by high temperatures and low rainfall. Monthly temperatures range between 26.5 and 30 degrees Celsius with high temperatures normally recorded between May and August. Mannar receives nearly 60 percent of its rainfall during the northeast monsoon, which lasts from October to December. 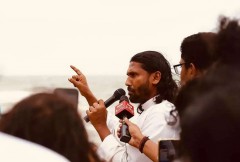