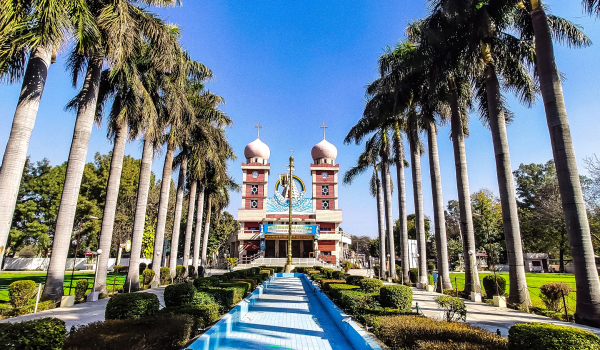 Besides covering the entire civil state of the northern India's Punjab, Jalandhar diocese comprises the neighboring four districts of Himachal Pradesh state. On its east, it borders Pakistan.

In the vast area of 51,120 square kilometers, there live about 27,000,000 people, out of whom nearly 116,500 are baptized Catholics. It is one of the few dioceses in northern India, which has got a large of number of Catholics. Though most of the missioners hail from the southern Kerala state, there are many local vocations, who volunteer to serve the diocese.

The region is mostly populated with Sikhs. Hindus and Muslims take the second and third positions.

The languages spoken are Punjabi, Hindi, Urdu, Pahari and English.

Until the partition of India, this part belonged to Lahore diocese, presently in Pakistan. It was looked after by the Capuchin missioners of Belgian province.

Creating the apostolic prefecture of Jalandhar on Jan. 17, 1952, the Holy See entrusted it with the British province of the Capuchins. Msgr. Francis Alban Swarbrick, OFM Cap, was appointed its prefect.

Raising it to be a diocese on Dec. 6, 1971, Capuchin Father Symphorian Keeprath, a missioner from Kerala, was appointed its first bishop. Auxiliary Bishop Anil Joseph Thomas Couto of Delhi was appointed its second bishop on Feb. 24, 2007, following the retirement of Bishop Keeprath. Bishop Anil Joseph Thomas Couto appointed as Archbishop of Delhi on Nov. 30, 2012 and Bishop Franco Mulakkal took the office on Jun. 13, 2013.

Besides the pastoral care of the Catholics, the missioners are involved in evangelization and education through its number of educational institutions.

The patrons saint of the diocese are: Blessed Virgin Mary (Nativity) and St. Francis of Assisi.

The major rivers like Ravi, Beas, Sutlej and Ghaggar and their various tributaries make the land fertile. Agriculture is the most important source of income. Wheat, rice, sugarcane and maze are the main cultivation. Most of the people are involved in farming and business. Punjab has the highest per capita income in the country. Having played an important role in the national freedom from the British, the Sikhs contribute to the progress of the country by their vast presence in the army, business and industries. Jalandhar is famous for its production of sports and leather articles.

The Golden Temple of the Sikhs is situated here in Amritsar. "The Vatican of the Sikhs" serves as their religious and civil headquarter. It attracts daily a large number of Sikh pilgrims, besides Indian and foreign tourists. The infamous Jallianwala Bagh is close to the Golden Temple.

The famous dances in the region are bhangra, gidda, jhumar, etc.