The apostolic vicariate of Phnom Penh covers the Kingdom of Cambodia and was established on Aug. 30, 1850, by the Holy See.

The three provinces of lower Cambodia, namely, Phsardec, Chaudoc and Sroctrang (South Vietnam), came under the vicariate from 1870 till 1955. On Sept. 20, 1955, the Holy See directed the vicariate to cater to the Catholics of Cambodia.

The Pol Pot regime of 1975-1979 destroyed the entire church, killing Khmer priests, brothers, and the bishop of the apostolic vicariate of Phnom Penh.

The Church was revived in 1990, and on Jan. 18, 1990, the Cambodian government agreed to build a church for all Christians, on the request of a Hungarian diplomat. Situated around six kilometers from Phnom Penh, the church was to be led by a tripartite committee, consisting Catholics, Christians of other denominations, and the Patriotic Front.

The Catholics in Cambodia requested the president of Cambodia in March 1990 to celebrate the Khmer New Year (April13-15) as per the Catholic tradition.

The request was approved on April 3. A letter signed on April 9, 1990, by the president officially recognized Christians in the state. 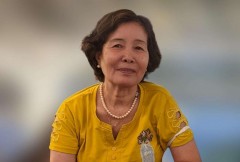