The total population was around 18,243,000 in 2016. In addition to the wide use of Bangla tribal languages, Garo and Hajong are also spoken by indigenous people in the diocesan territory.

Before September 1987, the area which currently is the Mymensingh Diocese, was part of the Dhaka Archdiocese. So the early history of the Church in this Diocese, is linked up with the history of Dhaka. In the second part of the 16th century, Catholics were already there in various parts of what now is the Mymensingh Diocese, as in Hossenpur of Kishoreganj District. But the remarkable Catholic evangelization work among the Garo people began only in the early 20th century. This work among the Garos and the progress made is indeed a bright spot in the history of the Church in Bangladesh.

In 1909, five Garo leaders made a long trip down to Dhaka to ask the Catholic Bishop to send a priest. A year later, the Bishop sent Father Fleury CSC, and Brother Eugene CSC, to study the situation. In late 1910 and early 1911, Father Adolphe Francis CSC, began the work in Tausalpara near Ranikhong. On March 19, 1911, Father Francis reaped the first fruits with 21 Catholic baptisms at Tausalpara. The first church among the Garos was built at Tausalpara in 1912, and in 1913, Father Francis began living there. In 1915, he moved to the Ranikhong Hill where Ranikhong Parish is now situated. Until 1918, Father Francis was practically alone, tramping the Garo country from east to west, covering the 90-mile strip of the territory. In the following twenty-five years, a total of six parishes were established.

On May 15, 1987, Pope John Paul II erected the Diocese of Mymensingh and named as its first Bishop, Father Francis Anthony Gomes, who was then studying in Rome. On September 8, 1987, the new Diocese was officially erected, and the new Bishop was ordained in Mymensingh. On Christmas Day 2003, Father Ponen Paul Kubi CSC (the then Director of the Pobitra Krush Sadhana Griha, Rampura, Dhaka) was appointed the Auxiliary Bishop of Mymensingh and ordained in Mymensingh on February 13, 2004. On July 15, 2006, Bishop Ponen Paul Kubi CSC, was appointed the second Bishop of Mymensingh by Pope Benedict XVI. The installation ceremony was held on September 1, 2006. By the end of 2006, the Catholic population of Mymensingh Diocese grew to 72,952.

No separate political structure is there in the diocesan territory. There are some seats in the Parliament for Mymensingh, and the citizens elect their representatives to those seats. No serious disruption of democracy is seen in the region. Minorities can vote and take part in politics without any pressure.

Mymensingh is connected to all parts of the country by land, and to some extent by river. Buses, trains and private vehicles are the main modes of transport to Mymensingh town. Roads and highways connect district towns and rural areas of the diocese.

The diocese covers a total land area of 16,448 sq. km. It comprises of the six civil districts of Mymensingh, Jamalpur, Kishoreganj, Netrakona, Sherpur and Tangail.

The per capita income in the diocesan territory is equivalent to 599 USD(as of June 2008, as per the Bangladesh Bureau of Statistics). The main agricultural products are rice, pineapple, jackfruit, banana etc.

The overall literacy rate of the diocesan territory is 47% (as per 2001 census). How to reach Mymensingh Diocese? 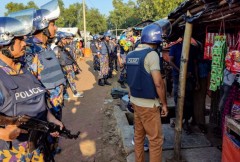 The mission to rectify illicit unions in Bangladesh
About five percent of Catholics in the South Asian country are in illicit marriages, Church says...