The Portuguese and Dutch traders maintained contact with East Timor in the early 16th century and Portugal took over control of the country until 1974. For a brief period, the country was occupied by Japan during World War II.

Indonesia invaded East Timor in 1975 and annexed the former Portuguese colony. The Church played an important role in the society during the Indonesian occupation and Bishop Carlos Ximenes Belo became one of the most prominent advocates for human rights and many priests and nuns risked their lives in defending citizens from military abuses.

Pope St. John Paul II's 1989 visit to East Timor exposed the occupied country’s situation to the world and provided a catalyst for independence. In 1996, Bishop Carlos Belo and José Ramos-Horta, two leading East Timorese activists for peace and independence, received the Nobel Peace Prize for "their work towards a just and peaceful solution to the conflict in East Timor".

Since its independence from Indonesia 1999, East Timor became a predominantly Catholic country in Asia (after the Philippines), a legacy of its status as a former Portuguese colony. While just 20 percent of East Timorese called themselves Catholics at the time of the 1975 invasion, the figure surged to reach 95 percent by the end of the first decade after the invasion.

The country is divided into three dioceses: Dili, Baucau and Maliana. The Apostolic Nuncio to East Timor is concurrently the nuncio to Indonesia. 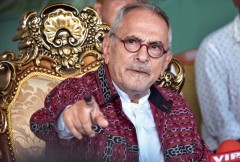