According to a tradition, St. Thomas the Apostle passed through the Taxila area of Pakistan in his pastoral journey through the subcontinent in the second half of the first century. An ancient stone cross found in this area of present Punjab province is taken as a sign of first century Christian presence in the area.

Although the origin of Christianity in Pakistan is not documented, a fakir (Muslim Sufi) sect of Thatta in Sindh province claims its origins to St. Thomas.

The documented history of the Church begins with Mughal emperor Akbar, inviting Father Jill Perera from Calcutta to Lahore in 1579. The Jesuits pioneered the Church in his era.

The first Church in the country was built on September 27, 1597, near the Lahore fort. Mughal emperor Jehangir, Akbar's son, ordered its closure in 1614. Ten years later the church was re-opened but demolished in 1632, on the orders of emperor Shah Jehan, Jehangir's son.

The proper mission began in the 19th century when military chaplaincies started in 1843 in Punjab and about the same time in Sindh provinces. The first to arrive were the Capuchins and the Mill Hill Missioners, and later the Dominicans, Jesuits and the Franciscans came.

Protestantism also began in the early 19th century following the arrival of the British. Anglicans in Pakistan were part of the Anglican diocese of Calcutta, until 1877 when the diocese of Lahore was created for them. Methodists, Lutherans and Presbyterians also established their presence in the 20th century. But the three churches, together with the Anglicans, formed a union in 1970 calling themselves the Church of Pakistan.

According to Pakistan's government data, country has 1.27 million Christians in a population of 201 million people, mostly Muslims. According to the 2018 Catholic Directory of Pakistan, the country has 1,333,450 Catholics.
Christians have won laurels for being a peaceful community, contributing in the fields of healthcare and education. Missioners introduced western education and established the top schools in the country.

The country has seven Dioceses, including two Archdioceses. 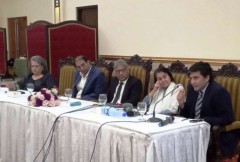