Christianity in Korea began as an indigenous lay movement. Korean Yi Seung-hun, who was baptized in China in 1784, began to baptize others in that year. As their faith began to spread, Catholics faced persecution and hardships from the rulers who viewed the religion as a subversive influence.

During 1801, several Catholics were killed including Korea's first priest Father James Zhou Wen-mo, who was sent there by the Beijing diocese in 1794. Rulers began to see Catholicism as a false religion that denies the Confucian ethics and invites the western imperialism to the country. The largest persecution in 1866 produced some 8,000 martyrs.

The persecution officially ended in 1886 with the signing of a treaty with France. But by 1910 Japan colonized Korea. Korea was liberated in 1945 when the Allied Forces defeated Japan, but was soon divided into North and South Koreas.

Catholics in the Communist North Korea were met with oppression again, and most of them fled to the South. North Korea revived religions in 1988 with building the Changchung Catholic Church in Pyongyang without any resident priest.

Also it claims some 3,000 Catholics, but the Catholic Bishops' Conference of Korea officially sees no local Catholic there, prohibiting South Korean priests from saying any Mass for the self-professed North Korean Catholics. Since the Korean War (1950-53) bishops in South Korea have been the apostolic administrators for the three dioceses there.

Catholicism in South Korea has been growing. As of 2019, it has 5.6 million Catholics among 51 million population. Its rapid growth is attributed mostly to its contribution to the country's democratization from military dictatorships in 1970s-80s.

The Church in Korea has three Archdioceses, 14 Dioceses and a Military Ordinariate. 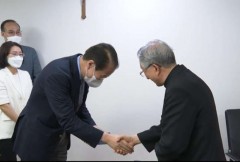 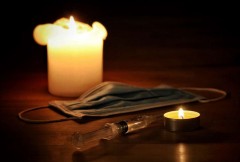