Bishop Ambrose Rebello was the chancellor and vicar general Aurangabad diocese when Pope Francis appointed him its bishop on April 13, 2015.

He was ordained priest in 1979 for the new diocese of Aurangabad and served it in different capacities.

In the first five years of his priesthood, he was assistant priest. Until 2011, he served as priest of several parishes.

How to reach Aurangabad Diocese? 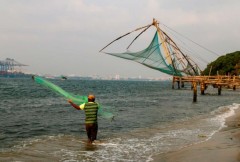